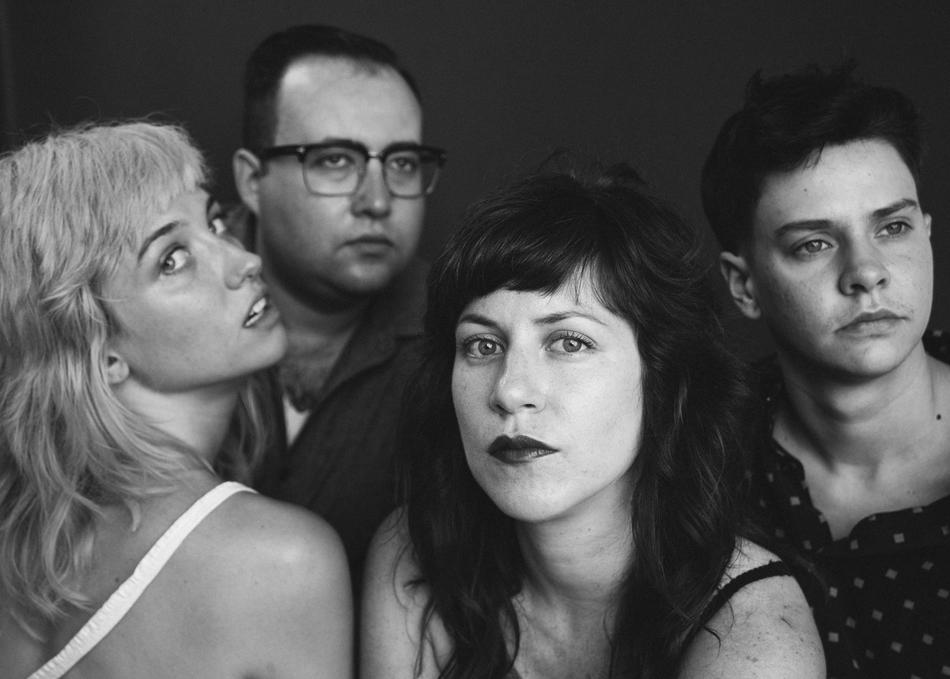 Recorded in the fall of 2016, the record is the culmination of two years’ writing, touring, tweaking, and refining. Throughout that time the band has carved out an existence on its own terms, performing mostly all-ages shows booked via a network of like-minded artists both within and outside punk communities.

The album represents a major step forward for Priests. It’s the band’s most stylistically diverse set of songs to date, expanding on their lo-fi post-punk bona-fides with ideas drawn from pop, R&B, and industrial noise. Thematically, Nothing can be understood as a series of vignettes — nine stories that crystallize into a bigger picture about the economics of human relationships, the invisibility of feminized labor, and the dual purpose of art for both the group and the individual.

The album will be the first full-length LP released on Sister Polygon Records, the label that Priests founded and operate.

Priests are Daniele Daniele (drums), Katie Alice Greer (vocals), G.L. Jaguar (guitar), and Taylor Mulitz (bass). Formed in 2011, the band has proven a valuable force for strangeness in a city that is increasingly terraformed by norms. At a time when few groups were making serious moves beyond the Beltway, Priests toured throughout North America and Europe. More significantly, they’ve helped to raise the general standard of show-going at home through cassettes and singles released on Sister Polygon, including music by bands like Sneaks, Snail Mail, Pinkwash, Cigarette, Downtown Boys, and numerous Priests-affiliated groups like Gauche and Flasher. Still, even amidst thriving hometown creativity, Priests possess a singular gravity. They are physical and combustible, urgent and visceral.

Following the release of Bodies and Control and Money and Power, Priests began to tweak their songwriting process – concentrating more deeply on melody, dialing down the distortion, and experimenting with dynamics. New songs evolved in performance, starting off tentative and gaining confidence and character on tour. The band recorded and scrapped versions of Nothing Feels Natural for almost a year before enlisting Hugh McElroy (Black Eyes) and Kevin Erickson, who worked with Priests previously on Tape Two, their Radiation/Personal Planes single, and half of Bodies. Nothing Feels Natural was tracked throughout summer of 2016 at Inner Ear Studios in Arlington, VA.

The result is by turns moody and explosive. “Appropriate” is a nod to Priests’ earliest incarnations – loud and corrosive, chaotic and improvisatory. “JJ” is streamlined and melodic, pitting barroom piano against warped guitar and bass tones. On “No Big Bang” Daniele takes up the mic while a Roland TR-707 holds down an unflagging pulse. The album’s title track and centerpiece “Nothing Feels Natural” builds slowly, with shimmering guitars eventually giving way to feedback and billowing reverb. Lyrically, Priests songs present contradiction. They are often delivered first person but under pretense that “you are not you”. Nothing Feels Natural centers the experiences of women but still asks us to “consider the options of a binary”.In these songs, innocuous moments often drive major ideological scene shifts. A cruel joke jostles the power structure of a love triangle. A PR sales-pitch is called out as identity theft. A list of aspirational consumer luxuries are chanted into a twisted emptiness. It’s a record that thrives amid the tension between that what is valued and what is dismissed; between what is desired and what is presented.