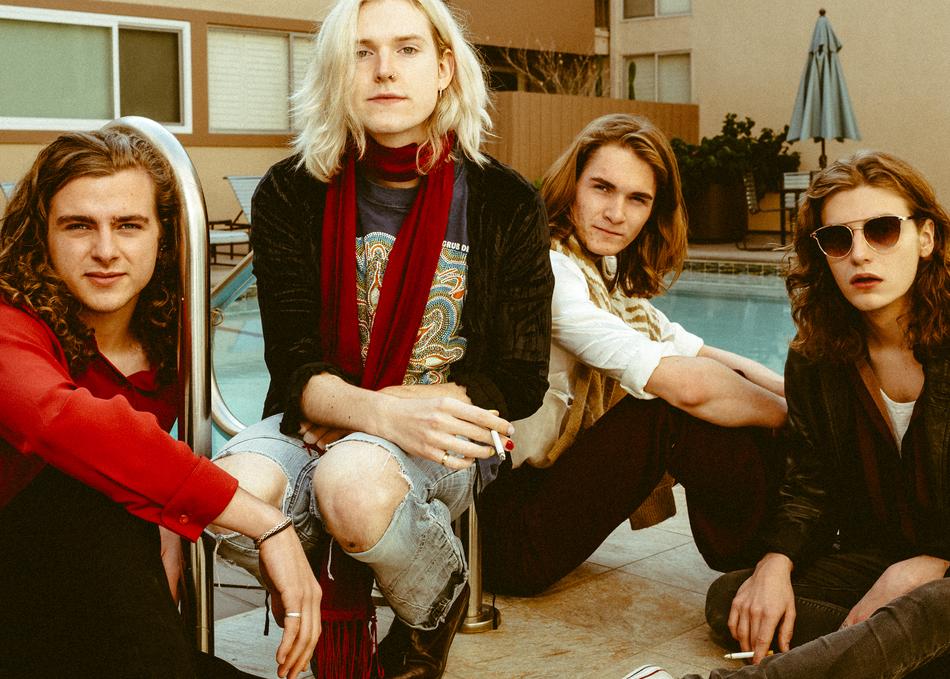 Oscar Lulu looks through the headlines, joins all the dots, peers to the very core of modern society, politics and social media, and senses crazy hands on the controls. “It’s like there’s this weird creepy clown who’s controlling everything and getting a real kick out of these bizarre things us humans are doing,” he considers. “Like, ‘oh my god, look what I can make them do now!’”

Forget the box, art rock sensations Sundara Karma think outside the whole damn packing plant. Their songs are personal reactions to art, literature and culture – Plato, Wilde, Bram Stoker, Manet, Buddha – that tackle topics from online self-obsession to consumer capitalism, the smokescreen of the nuclear family and the lies at the heart of the teenage dream. Oscar, aged just twenty, is already emerging as the most captivating frontman of our times, plucking at the long, silvery thread of rock’n’roll androgyny that runs through Bowie, Bolan, Suede and My Chemical Romance while embracing high art, questioning The System, probing his darkest autobiographical depths and musing – jokingly - about the evil clowns controlling the Earth.

Add in a truckload of solid gold anthems that view classic noughties emo melodies through the modern indie prism of Arcade Fire and The Maccabees, and it’s no wonder Sundara Karma are being hailed as the bright future of alt-rock, a reputation built on a clash of exotic and ordinary that’s embedded deep in their roots. Oscar was originally born in Singapore and lived there until the age of seven, adoring the multi-cultural aspect of the place and recalling the joy of having his mother paint his nails for him. When his father moved the family to Bourne End near Maidenhead for work, Oscar discovered rock music, inspired to write his first song “as soon as I could string three chords together” at the age of eight, inspired by the sight of Jack Black knee-sliding around a classroom like AC/DC’s pet rhino in School Of Rock.

At school he met drummer Haydn Evans and formed an “awful” band called Ricochet as his obsession with Green Day’s ‘American Idiot’, Sum 41 and MCR made him a fully paid-up emo. It wasn’t until his parents broke up and the fallout landed him in Reading, though, that Oscar stared into his own personal heart of darkness. “It’s a beautiful void,” he says. “When you die you’re supposed to face a dazzling darkness and that’s kind of what Reading is. It’s a cultural void, but it means that you’re forced to have some sort of reaction against it. It’s given us that boredom to want to do something meaningful with our lives.”

Sundara Karma, Sanskrit for ‘beautiful karma’, was their yell into Berkshire’s abyss. Meeting guitarist Ally Baty and bassist Dom Cordell at his new school, Oscar and Haydn formed the band aged 14 and began sneaking onto bills in “dodgy pubs with three people in the audience, mainly old, bearded, beer-bellied men who were more interested in the beer” from 16, often getting kicked out whenever the proprietors discovered they were underage.

Oscar’s androgynous onstage persona turned heads too, an expression of the gender-fluid individuality he sees becoming more accepted by the year. “I’ve never really felt like I fitted in,” he explains. “It’s not a bad thing – if you’re gonna wear eyeliner obviously there are going to be people not doing the same. But in the world of music and the creative world it’s really accepted to see these genre-crossing ideas, even to the point where quite commercial artists are cross-dressing. Our general level of acceptance has ridden that high that a man wearing a dress isn’t that outrageous anymore, it isn’t that shocking.”

There was a level of pretence to his performance, though. “Getting onstage is such a fraudulent thing to do, and so unnatural, for someone to get up and pretend they’re this confident showman. All our cavemen instincts tell us not to do that. So I quite like the idea of playing on that idea that it’s showmanship, that it is entertainment. So it’s not about ‘this is me from the heart’, even though it is a moment where you can forget about all the shit in your life and be in the moment.”

After bothering the bellied boozers of Reading for a year, Sundara Karma put a demo of one song called ‘Freshbloom’ online in 2013 and, almost instantly, the world woke up. Blogs swarmed, the industry buzzed, Chess Club Records came calling. “There was a crazy amount of hype around one song,” Oscar laughs. “We got swept away by it. We were seventeen, going ‘fucking hell, look at this!’. But that went really quickly, after we played our first London show at the Old Blue Last and totally ballsed it up. We played a song where there was no vocal melody organised for it or lyrics, it was just me ad libbing a whole vocal line. We shot ourselves in the foot a little bit, but luckily we’ve been able to pull it back.”

And how. When Chess Club released their debut ‘EP 1’ in February 2015, streams for the vampiric Arcade Fire epic ‘Loveblood’ hit a million (“I didn’t think it was real, I thought it was probably my mum listening to it loads, but you can get used to shit so quickly, I think that’s one of the tragedies of life”), they found themselves on tour with Wolf Alice and Swim Deep (“it was party central”) and bagged a slot on the BBC Introducing Stage at Reading & Leeds. In November a follow-up ‘EP II’, more commercial and less obsessed with loneliness and isolation than its predecessor, capped a triumphant twelve-month rise in which they’d toured Europe in the same bus as Circa Waves, played a “daunting but fucking wicked” show at Alexandra Palace with The Wombats and saw the crowds turn rabid on their own headline tour.

“Suddenly there was this feral engagement from the crowd,” Oscar says. “We’re not a rock band, nor is our music that heavy, but the people who come to our shows seem to really let go like it’s a fucking Rage Against The Machine concert.”

Having recorded tracks for their EPs and debut album in a number of studios in London and Oxford, there was only one place a bunch of inventive, androgynous budding rock icons could go to finish it. Berlin. Over ten “Groundhog Days” they completed six songs there, with producer Larry Hibbitt (ex-Hundred Reasons) dragging them to heavy metal bars after every session. “It probably did have an influence on the record,” Oscar says, “because it’s not a heavy metal record…”

They came home clutching the first classic album of 2017. ‘Youth Is Only Ever Fun In Retrospect’ is an artful miasma of modernist indie rock, combining the fizzling gamma energy of TV On The Radio, Arcade Fire, Foals, The Maccabees and The Killers into one killer laser beam of anthemic pop power. But it’s the album’s thematic intricacies that will draw hordes of obsessive outsiders to Sundara Karma.

The title is adroitly self-explanatory; on its surface, this record details the tribulations of youth that age gradually glosses over. Besides a lingering sense of ill-fitting loneliness and classic tales of foiled romance, unrequited yearnings and dysfunctional relationships on ‘Loveblood’ and the vivacious ‘Vivienne’, the issues run deep. ‘A Young Understanding’ tackles Oscar’s struggles with identity, how he attempts to mould himself into whatever the person he’s talking to wants him to be and how his interest in Buddhism and meditation helps him combat that “because it tells you that there is no self, there’s no fundamental thing which we are, it changes every single second, especially in the quantum world.” ‘Happy Family’ is a semi-autobiographical gospel hoedown about the façade of fracturing family life, while ‘Be Nobody’ challenges the expectation that everyone should be a star in their own online echo chamber – “we’re in the age of narcissism, obsessed with appearances, Facebook and putting pictures of your cats up online to get likes, or your dinner,” Oscar considers. “It’s about thinking into yourself and saying ‘at the end of the day I’m gonna die and I’m nothing in this infinite universe’.”

‘Youth…’ looks outward too. The synth-rock shimmy ‘Flame’ confronts consumer capitalism like some sort of Occupy Walmart protest. “We’re told that happiness will come from buying more shit or that you’re inadequate, from adverts, that you need to buy the new best thing in order to feel better,” Oscar argues. “It’s really fucked up and there’s definitely some shady shit behind power. For me it’s so obvious what’s wrong with the world at the moment and what the solutions would be – improving education for example, and taxing companies that have committed crimes. I don’t understand why those things aren’t happening. There must be some dodgy shit going on if these obvious things aren’t being addressed.”

The public myopia portrayed in ‘Flame’ was inspired by Plato’s Allegory Of The Caves, in which a prisoner is shackled in a cave facing a wall full of shadows from a fire behind him, believing the shadows to be reality. It’s only when released from the cave that he sees the full sunlit picture of the world. “Ever since I heard that story I thought it was crazy, especially how old it is and how relevant it still is.” The evocative, Coral-esque ‘Lose The Feeling’ continues the story, imagining the released prisoner “progressing to a more spiritual existence, he’s also making a physical journey through rivers and forests and valleys. It’s about some sort of salvation.”

Elsewhere, ‘Olympia’ is Oscar’s response to the titular Manet painting, ‘Loveblood’ is his attempt to personalise the fate and mysticism of Oscar Wilde’s Lord Arthur Savile’s Crime and ‘The Night’ emerged from his reading of Dracula at school. “I find I hard to go to a gallery or whatever and not walk away thinking ‘fucking hell, that was a really cool piece, that’s inspired me to do such-and-such’,” he says. “If I can’t think of anything else I’ll open a book and think ‘that’s a really inspiring line’ and then draw from that.”

Sundara Karma’s diary for 2017 is rammed with US tours with Spring King, UK tours with Two Door Cinema Club (including a return to Ally Pally) and their own headline shows but, like all the best restless intellects, Oscar is keen to keep exploring his billowing creativity. “I’d like to do a second album quickly, just to give people more of a picture of what we’re about,” he enthuses. “Even though this is our debut album I still don’t feel it represents us to the fullest. The stuff I’m writing at the moment is really different and better. I’d like to be a bit bolder with the next record.”