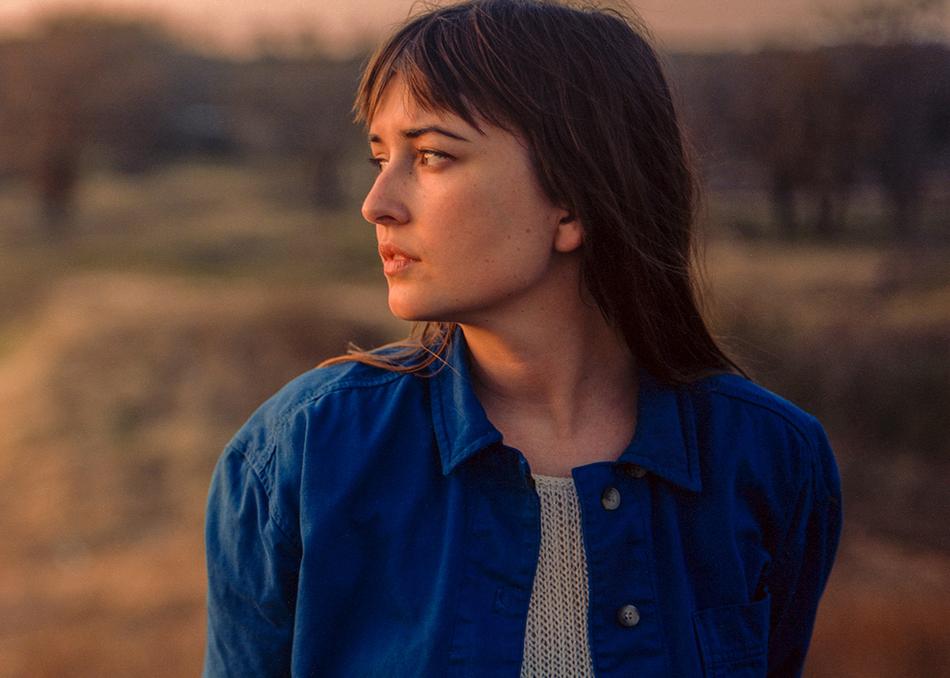 Jess Williamson’s heart song is a brave record. It explores the strength in vulnerability, the power in silence and empty space. The recordings bristle with energy and confidence while maintaining the intense intimacy Williamson is known for. Like the visceral desert landscape that inspires her, she knows when to let her vocals drift across the song, light like a tumbleweed, and when to, like the fiercest of Texas storms, unleash thunder and lightning with her band.

A few years back, Jess Williamson returned home to her native Texas to reconsider everything and rethink the direction of her life. It was that about-face that gave her the security and solitude, the inspiration, needed to create 2014’s highly acclaimed debut album, Native State.

But that was two years ago.

Williamson’s sophomore album, Heart Song, questions the structures of support inherent in the comforts of home and showcases the rare kind of artistry that is the hardest to achieve after early success: change.

The opening song, “Say It”, eases the listener into a groove before the song cracks open and floods the landscape with squall and noise and thunder; announcing that Heart Song is not the same album as it’s predecessor, that this work is not only the next logical step in Williamson’s evolution, it is also a leap forward for her as an artist.

On the album’s centerpiece and title track Williamson wonders aloud, “Will I grow into my body?” but no one listening to her music, her poetry, will doubt her growth.

Is freedom really nothing left to lose?

Is freedom something that I have?

Something that I have, with you?

You’ve got the phases of the moon to blame

But I am a slave to a part of my heart

The seventh and final song, “Devil’s Girl,” closes out the album with a step back, just close vocals and quiet guitar, and we are reminded again of the essence of what makes Williamson such a phenomenal artist: her ability to tap into the universal. “Yesterday I was on the phone with a woman with my mother’s name/ Offering to meet me halfway between here and St. Louis /And I saw again the intimacy that comes between/ Strangers with stakes in the same crisis.” The song is a meditation and a restorative close to an extraordinary album.

Heart Song was recorded direct to tape in Austin, TX by Erik Wofford (The Black Angels, Bill Callahan) at Cacophany Studios and by the band in Jess’s house. It was mixed by Larry Crane (Elliott Smith, Sleater-Kinney, Cat Power) at Jackpot Recording in Portland, OR. The album is out November 4th on Williamson’s own imprint, Brutal Honest, and is distributed worldwide via Kartel.

"The mix, mic'ed close and buzzing with room tone, puts us too close. There's the rasp of her guitar strings, the sound of her thumb pads working the bass strings, and her hood-eyed glare: "Somebody there takes your vitals conveniently while you're on the phone with me/Well that's what I call fucking timing." It's all too close, and it's transfixing." Pitchfork

"Jess Williamson, the Texas songstress who sings with the dusky manner of the singer-songwriter Lissie and the parched tone of the long-lost Karen Dalton." The Toronto Globe and Mail

"Her haunting singing voice, which twinges and aches throughout, infuses those tales with emotion that is at once unnerving and soothing." PASTE

"Its title track, with folksy banjo, bass and a gripping middle section of mostly voice, feels a bit like a homecoming waiting to come, ending memorably with "When you’re gone, you’ll be tattooed under mountains on my arm," a mournful line like something out of Scott McLanahan’s latest elegy to Appalachia." The FADER

"Jess Williamson knows a thing or two about painting a picture with her music—after all, she moonlights as a photographer in her hometown of Austin." MAGNET

"Like Joanna Newsom sans the shrill, her stripped sound and vocal vulnerability evoke a stark intimacy on this impressive offering." Austin Monthly

“It's a spare, personal experience that often finds Williamson with the simple accompaniment of a single instrument.” NPR’s World Cafe

“…this album comes across as a calm intake of a cleansing breath.” No Depression

“All of Williamson's songs have an ominous tension, like a dark cloud that threatens but never brings the relief of rain.” Pitchfork