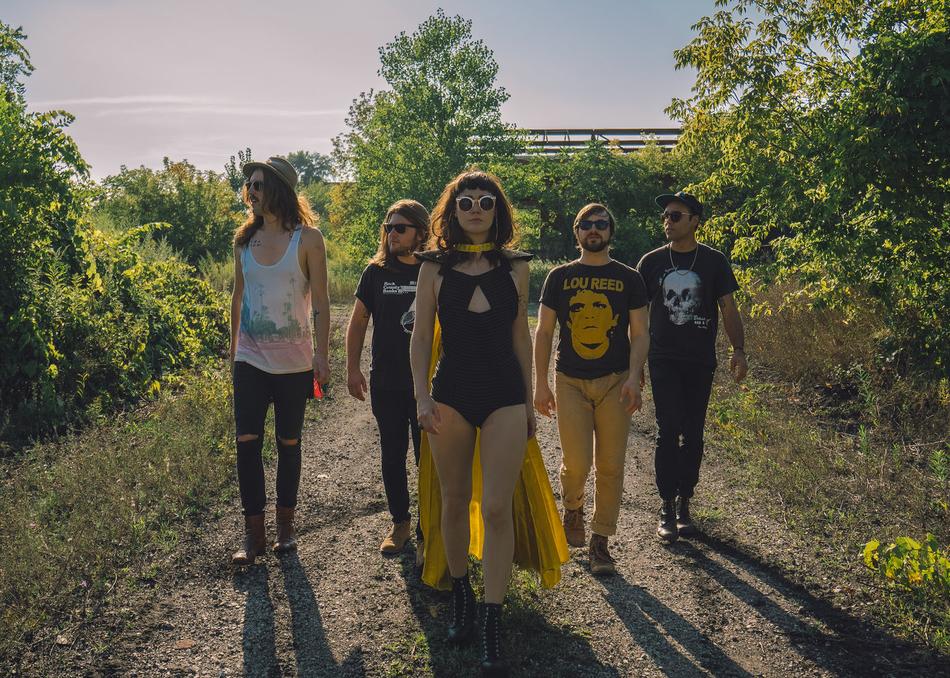 GGOOLLDD isn’t like other bands. They formed on whim, decided to play their first show mostly as an excuse to host a killer party, and they eschew the traditional gotta-get-a-record-deal game in favor of playing a lot of shows and releasing their own material. That sense of whimsy blended with resolute autonomy is all part of the signature GGOOLLDD aesthetic. And it feeds into their sound, especially lately. “Undercovers,” their new single, is a soaring banger that conjures wind-in-your-hair glittery romanticism. Co-produced and mixed by Ben H. Allen (MIA, Animal Collective) it reflects that core tension in GGOOLLDD between winging it and great artistry

The day after GGOOLLDD frontwoman Margaret Butler graduated from art school in Baton Rouge she packed a Uhaul and headed west. “I was like, yeah, I’m not going to live here anymore,” she recalls, laughing. Her first stop was Portland, Oregon, where she subsisted mostly on “ramen noodles and pumpkins people stole for me from Home Depot,” she remembers. “You sauté them down and add lots of black pepper and curry powder and soy sauce. It’s actually pretty good!”

Butler was riding high on that particular sense of freedom that comes when you’ve decided your life plan is to just say yes to pretty much everything. So you don’t really care that you’re broke and subsisting on stolen jack-o-lanterns, because you’re not in your suburban high school anymore, hiding your disdain for the cheerleaders. You’re in a weird and cool new town, hanging out with musicians and designers and artists. You’re free to mess around. Explore. And just when you’re starting to get a little over living “four people deep,” as Butler puts it, in your tiny apartment, another friend says, hey, come out to Wisconsin for a while. So you do. (Because: say yes!) And a while later, when, boozy in a bar one night, you hear some beats you think you’d like to write lyrics to, even though you’ve never so much as held a microphone in your life, you go for it. (Say. Yes.) And the next thing you know, you’re fronting a dynamic, dirty, synth-pop carnival of a band, hearing your single on the radio, and touring the country.

That’s Margaret Butler’s story. And that’s the story of her band, a group as inspired by the shimmery decadence of Queen as they are by the primal yowl of Black Sabbath as they are by the madcap joy of Yeah Yeah Yeahs. GGOOLLDD is one of the most resolutely celebratory rock acts to emerge in years.

It’s not hard to understand how someone like Butler, a woman with seemingly limitless natural charisma and an obsession with dressing up in outrageous costumes (Halloween is her favorite holiday) would eventually find her way onstage, but the singer insists that rock stardom was never part of her plan. “I never even considered being a musician, I always wanted to be a clothing designer, or a chef,” she says. “I’ve always created with my hands.” Butler’s father is jeweler, and technically that’s what she was studying to be as well. But she learned all her really important college-years lessons bartending at the Spanish Moon, a legendary venue in Baton Rouge. “It was the only cool place to go and watch music in the city,” she says. “I got to see every amazing band as they were coming up, from TV On the Radio to Of Montreal to Dirty Projectors.”

Thinking nothing of it, they threw the song up on Bandcamp, planning to go back to their day jobs, but that’s when the serendipity hurricane began. “Somehow college radio picks it up,” Butler recalls. “And it starts getting really good responses. And then it’s on their list of top-ten-plays list, which is just insane.” So they figured, why not keep this going for a while? “We were like, this is fun! Let’s write like three more songs, do a cover, and throw a party for Halloween where we can all wear gold costumes!” The Halloween party is now the stuff of GGOOLLDD legend. “I was Santigold, but instead of dressing up like the singer, I made an all gold Santa costume,” Butler recalls, laughing. “We played a terrible show to eight-some people crammed into our attic and it was one of the funnest nights ever! After that, people just kept asking us to play.”