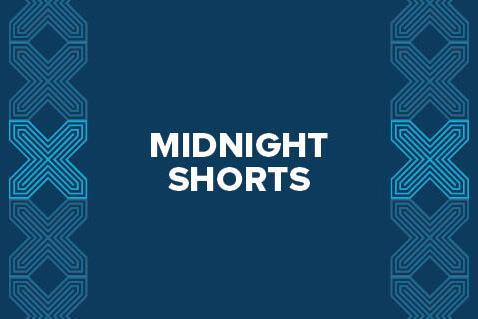 Le Pedophile tells the hard hitting story of a woman coping with a history of being sexually abused, and the violence and tenderness which helps her leave it behind.

WELCOME to WILLITS: AFTER SUNDOWN

Deep in the Northern California region known to marijuana connoisseurs as the “Emerald Triangle” lies the town of Willits. In the surrounding woods rests a rustic cabin, where a small-time drug dealer waits impatiently for his friend to arrive to complete a meth deal, urging him to get there before dark… for his own safety. As daylight fades, he grows more desperate, fearing a repeat attack from alien abductors. “AFTER SUNDOWN” serves as a proof-of-concept prequel to the Ryan Brothers’ feature screenplay Welcome to Willits.

Val and her friends play a game that allows them to communicate with the dead. The Knock Knock Game turns any doorway into a portal to the hereafter, but the girls soon learn that are rules that should never be broken.

A nice guy (Anton Yelchin) discovers a darker side of his personality when his girlfriend (Kate Lyn Sheil) reveals her hidden weakness.

A husband gets more than he bargains for when he discovers a strange totem on the ground, much to his wife's chagrin.

A red ball bounces past a cafe and a couple folks’ houses and then goes to the beach.

BAG MAN is the understated story of a 12-year-old African American boy, who takes us on an introspective journey out of the city and into the remote countryside of upstate New York. With a mysterious duffle bag in hand, its contents unknown to us, we journey from the urban hustle of Harlem, into the winter-ravaged woodlands a world away. On the road, we slowly discover his real intentions, and the significance of what is hidden inside a young boy’s bag.