The Secrets Behind Addictive Storytelling 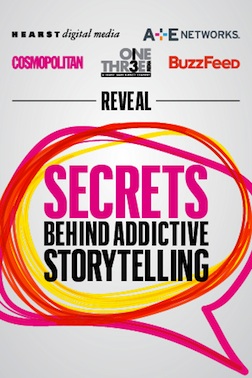 How can brands break through clutter, find an audience and forge lasting relationships?  The secret is addictive storytelling, with characters, voices and content that surprise, entertain and engage.

Learn how the pros do it as Hearst Magazines Digital Media President Troy Young talks with Cosmopolitan editor in chief Joanna Coles about how she’s reinvigorated the brand; Bob DeBitetto of A+E Networks about finding original programming in the most unexpected places; BuzzFeed's Jonathan Perelman, about compelling content that gets users sharing and Terry Wood, of Mark Burnett’s One Three Media, about how real people in extraordinary situations equals drama and ratings.

Jonathan Perelman is GM of Video & VP Agency Strategy at BuzzFeed. He is responsible for business management and branded advertising on BuzzFeed video, as well as leading partnerships with advertising agencies and brands for BuzzFeed. In 2013, Jonathan was the youngest person to be named AdWeek’s “Top 50 Executives Who Make the Wheel Turn.”

Prior to BuzzFeed, Jonathan spent over six years at Google, most recently as the Global Lead for Industry Relations. He was responsible for brand identity initiatives within the advertising and media industries. Google's Operating Committee awarded the prestigious OC Award to Jonathan for his work on mergers and acquisitions.

Jonathan is a Sr. Fellow at the Center for the Digital Future, at the USC Annenberg School. In addition, he serves on the board of Advertising Week (US and Europe), Internet Week, Ad:Tech, along with other industry groups. He served as an advisor to Cory Booker’s 2013 US Senate Campaign. Jonathan advises several startups, and is a member of several foreign policy international think tanks. He’s also an investor in early stage tech and media companies as part of NextGen Angels NYC.

Jonathan is a graduate of the University of Pennsylvania with a BA in political science. He lives in New York City with his wife, Alexandra, and two sons. You can follow him on Twitter @JPerelman, where he tweets about media, politics and his beloved Boston Red Sox, NY Giants and Arsenal FC.