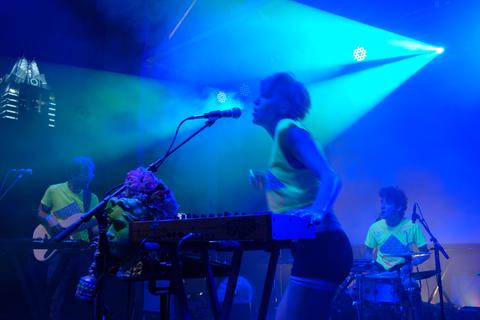 Based out of hot and happening Austin, TX, Holiday Mountain is a dynamic pysch-dub pop trio that incorporates world music, dance music, and pop songwriting to create a virally catchy sound. Songwriter, vocalist, and keyboardist Laura Patiño formed the group with drummer Zander Kagle and fellow alumnus bassist/synth player Bradley Will while attending Berklee College of Music in Boston. The band is named after Billie Holiday and the Rocky Mountains, two sources of infinite inspiration for Patiño.

Holiday Mountain shines brightest in performance: Their vibrant self-expression — a celebration of individuality, glitter, sweat, movement, and community — creates an atmosphere that keeps fans feeling connected and coming back for more. Holiday Mountain has been compared to Major Lazer, M.I.A., and Deerhoof.

The band independently released their debut LP, “Become Who You Are,” in 2012 at the Institute of Contemporary Art in Boston. The album has received rave reviews by Performer Magazine and music blogs such as FoundWaves and Pacific Coast Blog. They have officially showcased at SXSW 2013 and represented as “up and coming talent” by Berklee College of Music. “Unconventional in all the right ways,” Holiday
Mountain is a rising movement to keep your eyes and ears on.