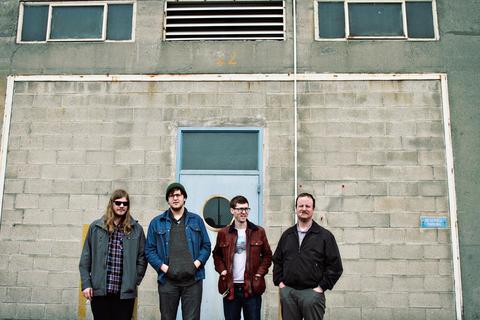 In a city full of brilliant people with dead-end jobs and dampened by bitter-cold winters, playing music offers a cheap outlet. Protomartyr’s taut, austere rock was incubated in a freezing Detroit warehouse littered with beer cans and cigarette butts and warmed, feebly, by space heaters. Short songs made for short practices, and the band learned quickly not to waste time. Despite the cold, Protomartyr emerged with a sound that is idiosyncratic but relatable, hooky but off-kilter.

There’s a temptation to call it garage rock, but that doesn’t quite fit. With respect to the local predecessors, this isn’t the primitive stomp of The Dirtbombs or The Stooges’ greasy roar. Punk works, kind of, even if it leaves the hardcore kids confused. Post-punk suggests something too retro; indie rock, something too precious. What Protomartyr is, is “stuck between the cracks.” If that’s the case, though, they aren’t alone. Protomartyr’s economical rock elicits comparisons to possible antecedents like Pere Ubu or The Fall as well as local contemporaries like Frustrations or Tyvek (whose frontman Kevin Boyer played bass in an early iteration of Protomartyr). Singer Joe Casey’s dry declarative snarl serves as a reliable anchor, granting his bandmates — guitarist Greg Ahee, drummer Alex Leonard and bassist Scott Davidson — the opportunity to explore textures and reinforce the rhythm section. In other words, to “fuck around a little bit more.”

This is never more apparent than on the band’s sophomore LP and Hardly Art debut, Under Color of Official Right. Where 2012’s No Passion All Technique favored comparatively straightforward punk structures, Under Color takes a more exploratory approach.

Recorded in a single weekend with Bill Skibbe and Jessica Ruffins (Wolf Eyes, Cass McCombs, Lower Dens, Six Organs of Admittance) at Key Club Recording Studio in Benton Harbor, MI, the album straddles studio professionalism and punk impulse. Shades of the band’s less obvious pop and R&B influences can be glimpsed in the sinuous grooves of songs like “Maidenhead” or “Violent.” Elsewhere, “Tarpeian Rock” places punk vitriol against a minimalist backing and “Scum, Rise!” casts shadows with guitars that alternately chime and clang.

Post-punk’s biggest inspiration, it seems, was its eagerness to demolish punk’s orthodoxy, to push against the arbitrary boundaries of genre — at least until it became one itself. For Protomartyr, inspiration usually arrives in the form of ideas or feelings, more than explicit musical references. By the time the band has shaped it to its needs, the source material is almost unrecognizable.

Casey’s lyrics often draw their details from books, real people and local landmarks. They’re relatable because they’re so specific. Take for instance, “Pagans,” in which Casey asks, “Livy recalled when the giants came / I didn't care about anything, except warm hands in the cold air.”

It’s emblematic of the band, this small moment captured and repurposed into something greater. Influences are managed the same way, condensed to a moment and ground into the new whole. The cheap outlet, crafted by cold hands in a poorly insulated practice space has, perhaps unwittingly, become a model of Motor City efficiency. And, more than that, it’s produced a stunner of a sophomore album.