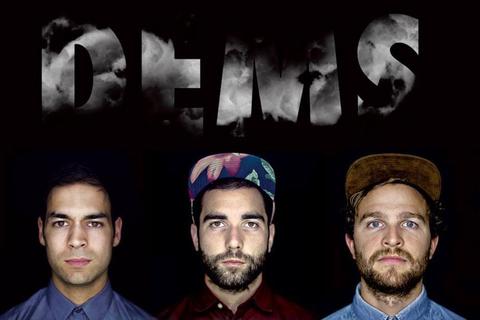 “Moss’ haunting vocals sound like a moment of resignation, giving himself to his deepest passions. In terms of songs about wanting, it’s as relatable as they get” – Pitchfork

“If they can maintain this standard of intricate beauty in both visuals and sound; Dems’ complete collection will be nothing short of a masterpiece” – The Line of Best Fit

Dan (vocals), college-mate David (beats, vocals) and University flatmate Duncan (guitar) formed Dems in 2011 after an early Demo, ‘Lioness’, led to a wave of critical appreciation, with plays on BBC Radio 1, 6 Music, XFM and numerous features on prominent music blogs.
In 2011, tastemaking imprint Bad Life released their debut 7” single, ‘House’ which was played by the likes of Huw Stephens, Rob Da Bank, while B-Side ‘Down On You’ amassed 2.5 million YouTube plays and featured on BBC Radio 1’s Essential Mix; subsequent releases have been featured on UK hit television dramas ‘Made In Chelsea’, ‘Hollyoaks’ and more.
Support slots on tour with Azealia Banks, Fenech Soler, Jakwob and Is Tropical have followed from their sell out live performances at venues like Birthdays and Corsica Studios, and they now work with pioneering 3D graphic artist Matthew Plummer Fernandez on spectacular live visuals that accompany their sound.