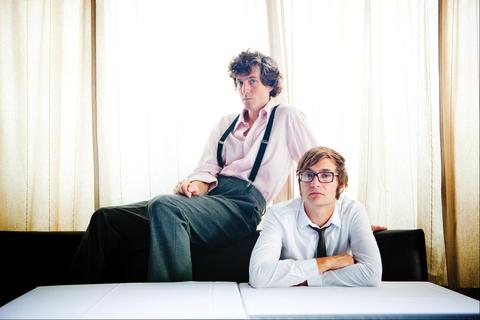 "Two dudes, two mics. Anything can happen."
Behold, the proclamation of Yip Deceiver, the tag-team all-analog dance duo, who broadcast sexxed-up jambox jaunts and light club floors ablaze at home in Athens, Georgia and beyond. Their debut album, Medallius, dishes out 11 tracks of rump-shaking, fist-pumping ecstaticism, from the minimalist Detroit- style bassline and funktified guitar strums of "World Class Pleasure" to the tightly-wound dance-anthem, "Get Strict." The sonic lovechild of producer/songwriter, Davey Pierce, and executive vibes manager, Nicolas “Dobby” Dobbratz, Yip Deceiver fills the void for music that can stoke a party-fire and eschews cooler-than-thou posturing.
Perhaps it's Italo-disco without the Italy, blasting iridescent electrofunk that howls with neon keyboard trills and 8-bit handclaps or more simply – synth-pop. "Medallius is an attitude and a lifestyle," Dobby says of the philosophy of their made-up title. "Medallius is always keeping an elegant attitude regardless of how trashy a situation is." The album keeps it classy. "Color Me In" could be music for an after-hours fashion show on Venus, or "Lover," Davey postulates, could provide the soundtrack for "an '80s or early '90s super-triumphant fringe sport movie, where someone moves somewhere and becomes a bad-ass at karate, skateboarding, or BMX riding." Dobby calls it "'smooth punk," Davey thinks it's "indie R&B."
Whatever you call their music, the result is undeniable: Motion. Emotion. Undulation and perspiration whether you're singing along in traffic jams or sweating it out in a dark, dank club. It's all by design. "Most of the songs on Medallius started as completely different songs before getting to the final version," Davey says,"'Tops Part II' started as a sort of homage to Led Zeppelin's 'Kashmir' and we decided that it would be better if Babyface produced it."
Onstage, they’re antidote to the laptop jockeys and deejay types these days who simply sway behind a MacBook. This is a rock show you can dance to. “We try to make our live show as intimate as possible,” Davey says. “We like everyone who bothered to show up feel like they are a part of the whole thing, because they are. We wouldn't be there if they weren't there and we want them to know that.” And Yip Deceiver really works for it; they trade off wielding the mic, take turns charming the audience, and jump from keyboards to beat box and back again. “When we get up on stage and sing those songs, we mean it,” Dobby says, “but we’re not afraid to literally laugh at ourselves at the same time. It is a genuine expression of who we are and what we love without taking ourselves too seriously.”
When producing Medallius, the guys created and recorded the collection in their Georgia homes and in Dobby's California studio, but back in the tightly knit creative community of Athens, Dobby says, is where the sound developed. They would ride bikes to mix the album with Andy LeMaster, whose studio was two blocks away from theirs. And to provide the album's signature retro-futuristic feel, they decided
to use only the most cutting-edge technology circa 1983. "We are totally addicted to analog synths, FM synthesis, and MIDI Sequencers," Davey confesses. "We program our drum tracks on an MPC and we don't use soft synths or the like. Everything is hardware. We enjoy the process, the experimentation, and the immediacy of the machines we work with. We spend hours finding a sound and as soon as you change anything, it's gone forever. We love that."
Dobby's process springs from a source much less IBM and more, let's say, NSFW. "I have a dirty mind," he says. "I write dirty versions of all of our songs first to get it out of my head then erase the bad words and rewrite. I also tend to imagine myself as a strong Anita Baker or Chaka Khan, female R&B type when I'm writing. It's a delusion and a weird process but Davey lets me do it." Davey understands because he secretly strives to be the masculine side in their buoyant brand of indie R&B: "I try my hardest to emulate Luther Vandross."
After all, their obsession for R&B brought them together in the first place, back when Dobby was crashing at Davey's house in Athens. "One day he picked me up in his car to show me all the good places to eat lunch," Dobby recalls, "and the radio was on and we both started singing along to some Usher song or something. We were both laughing at each other surprised. Every once in a while you find someone who's got the same secret musical taste, they just don't talk about it. It's never who you think."
Yip Deceiver wants to be your guilty pleasure, that secret music that brings friends and strangers together for their outlandish and irresistible brand of new New Jack Swing, post-proto synth-funk, or whatever musical box that they will never cease to obliterate. Perhaps Davey puts it best: "It's music for a weird night of random adventure."