The Hacker Wars / The War Has Already Begun 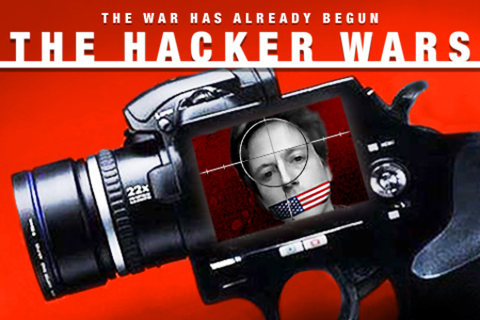 The battlefield is the Internet. Whoever wins the Internet wins the war. Panelists: Vivien Lesnik Weisman, award winning filmmaker, in the editing stage of The Hacker Wars- a documentary film, Tor Ekeland, who represents weev & KYAnonymous, Joe Fionda advocacy journalist and actor and Jay Leiderman, renowned criminal lawyer, the hacktivists advocate.
Panelists will discuss Barrett Brown, Texan and journalist facing 105 years in jail for hyperlinking. This case is so explosive that a media gag order is in effect. We discuss how Brown’s case is linked to that of Jeremy Hammond hacktivist and revolutionary sentenced to 10 yrs for hacking Stratfor, a Texas intelligence contractor and to that of weev, the hacker who didn't hack AT&T. He is is doing 41 months in federal prison for what those in the tech community consider a non-crime. The focus is on how the cases impact the future of online liberty, the criminalization of dissent and the suspension of the rule of law.

Jay Leiderman is a criminal defense attorney in Ventura, California. He co-authored the first ever book on the legal defense of California medical marijuana crimes and has been called the “Hacktivist’s Advocate” for his work defending those accused of computer crimes. He has been recognized and won awards for going above and beyond to represent clients accused of all sorts of crimes.

The CFAA is the federal government’s primary weapon in its prosecution of what it considers computer crimes. Tor’s involvement with the CFAA began with a chance meeting with the infamous Internet troll Andrew Auernheimer (“weev”), the defendant in U.S. v. Auernheimer, currently on appeal at the U.S. Court of Appeals for the Third Circuit.

Tor served pro bono as lead trial counsel on U.S. v. Auernheimer, and he serves alongside Orin Kerr, the Electronic Frontier Foundation, Hanni Fakhoury, and Marcia Hoffman as appellate counsel. The Third Circuit’s decision will set an important precedent on the interpretation of the notoriously vague CFAA. Amicus briefs arguing for appellant Andrew Auernheimer were filed by the Mozilla Foundation (via Stanford’s Center for Internet and Society’s Jennifer Grannick); the National Association of Criminal Defense Lawyers; The Berkman Center for Internet and Society at Harvard University, and a group of prominent information security specialists including some of the biggest names in the business. The case has received considerable media attention, including an in depth front page article in the Washington Post and coverage in the New York Times, Wall Street Journal, Rolling Stone, Mother Jones, The Atlantic, Columbia Journalism Review, and numerous other journals and media outlets.

In addition to U.S v. Auernheimer, Tor represents, along with Jay Leiderman, former Reuters Social Media Editor Matthew Keys in U.S. v. Keys, another case that has received significant national media attention. Mr. Keys is currently under indictment for CFAA violations in the Eastern District of California for his alleged participation in a hack of the Los Angeles Times website. Finally, Tor represents Deric Lostutter. Mr. Lostutter is currently under FBI investigation, and faces a pending indictment, for his alleged role in exposing information leading to the conviction of two Steubenville, Ohio High School football players for the rape of a 14-year-old girl. Mr. Lostutter was also instrumental in exposing the widespread cover up of the rape by students and officials in Steubenville, Ohio. If he is charged under the CFAA, he will face more jail time than the young men convicted of the rape.

Vivien Lesnik Weisman is a filmmaker, writer and political commentator. My panel at SXSW Interactive is The Hacker Wars. My documentary film by the same name is in the editing stage.

Born in Havana, she graduated from Barnard College with a B.A. in Art History and New York Law School with a Doctorate in Jurisprudence. She went on to receive an MFA in directing from the UCLA School of Theatre, Film and Television.

She is currently directing and producing The Hacker Wars, a feature length documentary about the targeting of hacktivists, activists and journalists by the US government. She is a contributor at the Huffington Post.
Her most recent film, The Man of Two Havanas,premiered at Tribeca. The critically acclaimed film has won the most prestigious awards throughout the world. She resides in Santa Monica, Ca.