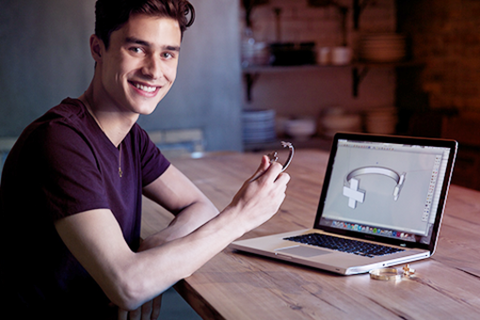 Manufacturing is experiencing a renaissance thanks to advancements in 3D Printing and 3D design software. Now, anywhere in the world, individuals have access to world-class manufacturing without the traditional barriers to entry -- no upfront capital costs, no inventory, no risks. Historically, to bring a product to market, one would need to find a factory, commit to a large batch size, and make a significant upfront investment. Today, there are thousands of entrepreneurs selling physical products without having to invest in the equipment or tooling. Some are as young as 10 years old, and they need is an idea, a computer, and Internet connection.

Join two of the leaders in 3D -- Shapeways CEO and Co-Founder Peter Weijmarshausen, and a surprise special guest, the CEO of a world leader in 3D design software. They'll discuss how 3D Printing is disrupting traditional manufacturing and why it might be time to quit your day job and create the product of your dreams.

Peter Weijmarshausen is the CEO and Co-Founder of Shapeways, the world’s leading 3D printing marketplace and community. Prior to Shapeways, Peter was the CTO of Sangine, where he and his team designed and developed satellite broadband modems. Peter was also Director of Engineering at Aramiska, where he was responsible for delivering a business broadband service via satellite. Earlier in his career, Peter worked as ICT manager for Not a Number where he facilitated the adoption of the widely successful open source 3D software Blender. Peter was born and raised in the Netherlands and moved to New York in 2010.