Why Fanfic Is Taking Over the World 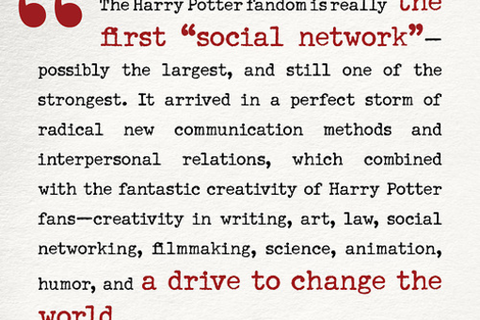 Fanfiction is mainstream - in some sectors and to some creators. Whether that's good for fans, creators, publishers, tv networks or social media companies - and their lawyers and investors - is a question that unfolds every day.

Why does fanfic matter? And what makes it so important to the future of literature? Where do fan-created projects come from and - in a world of tumblr, Kindle Worlds, commissions, tie-ins and new writers who are inspired every day - where is it going?

FIC: Why Fanfiction Is Taking Over the World, a collection of essays by fandomers, writers and subjects of fanfic edited by Anne Jamison and published by SmartPop Books, is a groundbreaking exploration of the history and culture of fan writing and what it means for the way we think about reading, writing, and authorship.

Heidi Tandy looks at the Harry Potter fandom and explores this transmogrifying genre of storytelling and its impact on creative fans, media companies, storytellers and lawyers.

Heidi Tandy (heidi8) is an attorney with a focus on intellectual property and Internet law; she's also been active in fandoms and fan creativity for over fifteen years, and is one of the essayists featured in FIC: How Fanfiction Is Taking Over the World (edited by Anne Jamison).
She's been a list mod, site founder, fandomy reporter, con organizer, Comic-Con panel hostess, fanfic writer, vidder, reccer and curator, member of the legal committee for the Organization for Transformative Works and a founder/writer at FYeahCopyright.tumblr.com which examines legal issues that impact fandomers.
Heidi has participated in the Harry Potter/Wizarding World fandom since the day of Goblet of Fire's release and has since found herself in other fandoms, including Supernatural, Heroes, Teen Wolf, Doctor Who, The Tomorrow People, Neil Gaiman's novels and Lev Grossman’s The Magicians series.
She is Of Counsel for Intellectual Property at the law firm of Price Benowitz LLC.