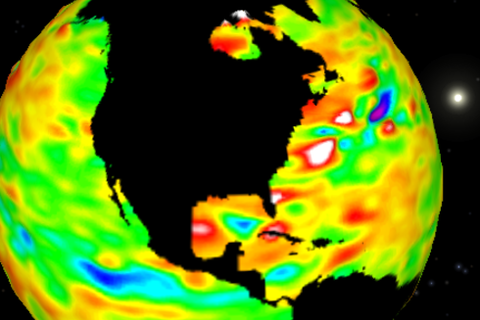 NASA isn't just sending rovers to Mars and astronauts to the International Space Station. Find out how the space agency is studying our home planet and why it's working to make the Earth science data it collects understandable and meaningful to the public, policy makers and media. See where NASA’s 16 Earth-orbiting satellites are right now, and learn how their data can be viewed on your phone, often within hours of being collected. Hear from communicators and designers working with climate change scientists to put a planet's worth of information in your hand via mobile apps, interactive websites, near real-time visualizations, and social media. Plus, get a sneak peek at NASA Earth-observing missions launching in 2014-2015. Earth is changing. We're on it.

Andrew Revkin has covered science and the environment for 30 years in newspapers, magazines, books, documentaries and his New York Times blog, Dot Earth, winning the country's top science journalism awards multiple times. He was a staff reporter at The Times from 1995 to 2009.

Since 2010, he has been the Senior Fellow for Environmental Understanding at Pace University, where he teaches courses on blogging, environmental-science communication and documentary video with a focus on sustainable development.

He has written acclaimed books on global warming, the changing Arctic and the fight to save the Amazon rain forest. Revkin has also written three book chapters on communication and the environment and speaks to varied audiences around the world about the power of the Web to foster progress on a finite planet.

Two films have been based on his writing – “The Burning Season” (HBO, 1994) and “Rock Star” (WB, 2001). He’s a performing songwriter and accompanist for Pete Seeger in spare moments and recently released his first album of original songs.

A space enthusiast from an early age, Ellison spent 8 years as a multimedia producer for a medical training company before gaining the attention of NASA's Jet Propulsion Laboratory where he has been a Visualization Producer since 2010.

Work includes technical director for Eyes on the Solar System and the Spacecraft 3D AR App. He was also the technical lead for the Mars Science Laboratory landing animation.

In 2013 he was awarded an Honorary Doctorate in Design by his Alma mater, De Montfort University in Leicester, England.

Michael Greene is the Manager for Public Engagement Formulation for NASA’s Jet Propulsion Laboratory. He has worked in digital media, website development, film production, strategic planning and marketing over 20 years. He is the recipient of seven NASA honor awards and has led the team responsible for NASA’s Webby-award-winning Global Climate Change website. He spearheaded several public engagement formulation and implementation efforts which succeeded in increasing NASA’s visibility in Earth science and Astrophysics. He has produced Earth science videos and visualization products for NASA. He also produced the Showtime Network movie JASPER, TEXAS (Jon Voight, Lou Gossett Jr.) which won the NAIC Vision Award for Best Drama in 2004. He is a trustee of several nonprofit boards and is also a published poet and a MacDowell Colony Fellow. He holds an undergraduate degree in Economics from Harvard College, a master's in English from New York University, and an MBA from UCLA’s Anderson School.

Veronica McGregor tweets to millions of people each day while channeling her inner robot. She manages the award-winning news and social media operations at NASA’s Jet Propulsion Laboratory, overseeing accounts and campaigns across YouTube, Twitter, Facebook, Ustream, Google+ and more. She currently tweets as @NASAJPL and @AsteroidWatch, and is part of the "hive mind" operating @MarsCuriosity.

Veronica launched NASA into social media in 2008 with @MarsPhoenix, the space agency’s premier mission account. Offering pithy updates in the first person, @MarsPhoenix became the fifth most-followed Twitter account while the mission was ongoing. In 2009, Veronica organized NASA’s first live-streamed interactive broadcasts on Ustream and created the first “NASA Tweetup” – an event designed to bring social media followers behind the scenes to witness mission operations firsthand. Now called “NASA Socials,” over 70 events have been held at NASA centers across the U.S. with similar events held by space agencies in Canada and Europe.

In 2013, her team won the SXSW Interactive Award for Best Social Media Campaign and the Webby Award for Overall Social Presence. Veronica is also the recipient of the Space Communicator award from the RNASA Foundation and the Exceptional Service Medal from NASA. Before joining NASA-JPL in 2001, she worked at CNN as a producer and assignment manager.