The Algorithm Method: Love in the Social Media Age 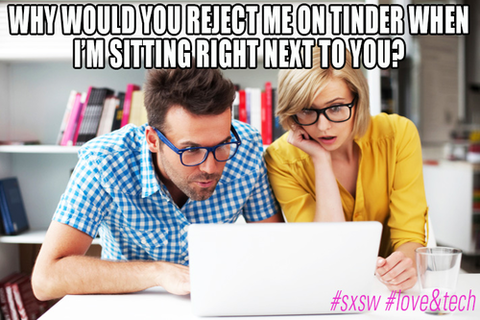 Social media has made finding love easier: reconnecting with your college sweetheart on LinkedIn, broadcasting emotions on Twitter and maybe even finding our soul mate on a mobile app. But dating sites & social outlets facilitate infidelity & exploitation in a relationship as efficiently as they bring couples together. 2/3 of divorce cases have used evidence from Facebook. Tons of people learnt they were dumped by checking their ex’s FB status. A 2013 study shows people communicate more by text today than by phone.
Technology & digital media have changed the way we digest information and communicate. However, our love lives are possibly impacted most of all. We will cover many provocative topics such as how online dating creates endless dates, making it more difficult to achieve lasting love; the impact of technology on long distance relationships—Mashable reported on “Fundawear” by Durex; whether porn is ruining our love lives; whether technology has made cheating impossible & more!

Andrea Miller is the founder and CEO of YourTango, the premier media company dedicated exclusively to love and relationships. Its mission is to help people live their best love lives and be at the center of this never-ending conversation.
YourTango presents compelling, thoughtful editorial that inspires, nurtures, informs, and entertains. They have created an interactive platform where their community of users, brands, and the world’s leading relationship experts connect and engage where it matters most: the heart.
The company strives to nestle the YourTango brand happily in hearts everywhere. Andrea and her team are passionate about tapping the immense power that love engenders and igniting action across the globe—one couple at a time.
Andrea is featured frequently in the media, including multiple appearances on The Today Show, The Early Show, Better TV, CNN, E!, Fox News, ABC, and radio stations across the U.S., as well as in national publications such as USA Today, The New York Post, The Los Angeles Times, and Business Week. Andrea is a frequent panelist and guest speaker on industry panels, including at SXSW, as well as classes and events at Harvard University, Columbia Business School, Fordham University, The Wharton School and NYU Stern School of Business.
Andrea is a graduate of Tulane University (B.S. Mechanical Engineering) and Columbia Business School (M.B.A.) where she was the managing editor of The Bottom Line, the school’s student newspaper. Prior to launching Tango, Andrea’s career was in finance and consulting, including positions with Goldman Sachs, ICF Consulting and Enron’s international finance team. While with Enron, Andrea was based in Mumbai, India for three years.

Andrea serves on the Board of Trustees of the New York Theater Workshop. She is a licensed private pilot; a yoga junkie; and an avid karate practitioner. Andrea lives with her husband and two sons in New York City.

Helen Fisher, PhD, is a Biological Anthropologist at Rutgers University and Senior Research Fellow at The Kinsey Institute, Indiana University. She studies the evolution, brain systems (fMRI) and biological patterns of romantic love, mate choice, marriage, adultery and divorce, gender differences in the brain, the biology of personality, and the neuroscience of leadership and business styles. She has written five internationally best selling books, including WHY HIM? WHY HER?, WHY WE LOVE and ANATOMY OF LOVE and publishes widely in academic journals. She is currently Chief Scientific Advisor to the Internet dating site, Match.com and it’s subsidiary, Chemistry.com, where she designed the Chemistry.com questionnaire now taken by 13 million people in 40 countries. She lectures worldwide; including lectures at TED, The World Economic Forum (Davos), 2012 international meeting of the G-20, National Academy of Sciences, The Economist, United Nations, Smithsonian Institution, and the Salk Institute, and she appears regularly on TV, radio and print media. For her full CV, see her website: helenfisher.com

Ian Schafer, Founder & CEO of Engine USA’s Deep Focus, is among the most influential voices in digital marketing and social media.

A former Miramax Films executive and veteran digital marketer, Ian founded Deep Focus in 2002. The digital agency for the social age, Deep Focus’ clients include numerous brands within the portfolios of global companies such as Nestlé, Pepsico, and Pernod Ricard.

Lauded for its excellence at using digital and social technology, creative, and paid, owned, and earned communications strategies to build always-on brands, the Emmy® Award-winning firm is responsible for leading its clients' brands to become the most engaging brands on the world. It is the recipient of numerous distinctions from the IAB, Webby Awards, and Cannes Lions.

In 2012, Deep Focus created another first, the Moment Studio, a creative newsroom for real-time branded content.

An Advertising Age Media Maven and one of Adweek’s “Young Ones,” Ian won the 2013 Shorty Awards’ “Best CEO Social Media Presence.” Featured in Wall Street Journal, New York Times, CNN, Digiday, Fast Company, Fortune, Mashable and Wired, among others, Ian sits on the executive board of the Social Media Advertising Consortium, the Global Advisory Board of Global Social Media Week, and is a founder of the Technology, Advertising & Startup Council.

A veteran tv commentator and host, Allison has made hundreds of appearances on CNN, NBC, CBS, ABC, Fox, E!, MSNBC, VH1 & MTV, and has published several hundred articles for publications as diverse as ELLE, Newsweek, the Chicago Tribune, Cosmopolitan, New York magazine & The New York Post, covering everything from Burning Man to Comic Con to NY Fashion Week to the White House Correspondents' Dinner, as well as interviewing unconventional experts in the realm of happiness and relationships, and examining the impact of technology and social media on culture. She has spoken at conferences around the world as well as universities like MIT, Wharton, Harvard on new media, personal branding, unconventional purpose driven marketing, and hacking happiness.

Allison got her start as the dating columnist for Georgetown University when she was an undergraduate. A recovering social media addict with over 300k combined Facebook and Twitter followers, she’s lived in New York, LA, DC and Chicago. Now she lives, loves, and experiments with happiness (and a lot of yoga) in San Francisco.