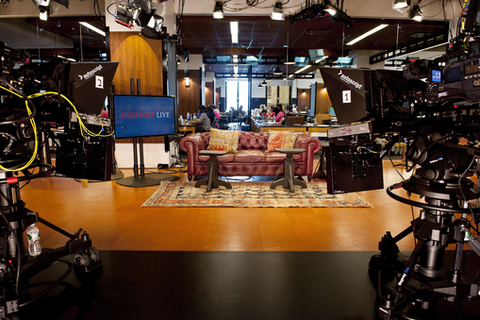 The rise of online video is disrupting nearly every facet of the TV industry, from programming to distribution to audience. As this shift becomes more prominent and media platforms battle for viewers, the industry is faced with new challenges: What is the target audience? What type of programming is most appealing to consumers? How is social going to further impact the industry? As consumer interaction becomes more prevalent on nearly every platform and device, people no longer want to be talked at -- they want to be talked with.
The Huffington Post’s founding editor, Roy Sekoff, capitalized on this shift from presentation to participation with the launch of HuffPost Live, HuffPost's live-streaming network. Built to be the most social experience on the Web, HuffPost Live gives viewers a voice. Roy is effectively democratizing the media by putting the platform and content in the hands of the audience. Is this is the inevitable future of TV? Roy will explain why it is.

Roy Sekoff is the President and co-creator of HuffPost Live, and founding editor of the Huffington Post. Before helping create HuffPost, he was a writer and on-air correspondent for Michael Moore's Emmy-winning "TV Nation." His written work has appeared in numerous publications, including The Village Voice and The London Times, and is a frequent guest on a wide-range of TV and radio shows. In 2013, Roy was named one of min's 21 Most Intriguing People in Media.