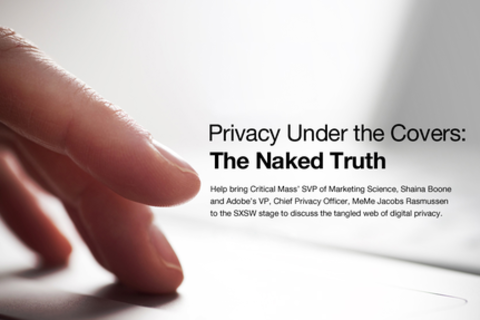 The privacy landscape evolves dramatically every day. It is a legal, governmental and humanitarian soap opera. Most data privacy conversations to date have done little more than make consumers suspicious and often paranoid.

Break down the misconceptions around data privacy. This informational seminar will share the real story from leading voices in marketing sciences and legal privacy fields about digital data privacy issues. Learn what data is being collected and how it’s being used. Find out how legislation in the US and Europe is impacting consumers and marketers. Understand how data privacy protects and inhibits your personal online experiences. Discuss how data can be used legally and responsibly in online experiences.

Join us to demystify your data privacy questions once and for all.

MeMe is chief privacy officer, vice president, and associate general counsel at Adobe. In her role, MeMe oversees Adobe’s privacy strategy and policy. She also leads a team of attorneys and paralegals with responsibility for providing legal services to Adobe’s cloud teams.

Prior to joining Adobe in 1997, MeMe served as general counsel and later chief operating officer at Rocket Science Games. Previously, she practiced law at Gray Cary Ware & Freidenrich in Palo Alto, California, and at Foley, Hoag & Eliot in Boston. MeMe started her career in the early 80s as a technical instructor at Prime Computer near Boston before joining the company’s in-house legal department.

MeMe is a member of the California bar. She holds a law degree from Suffolk University and a bachelor’s of science degree in computer science from the University of Vermont.

Shaina is the SVP of Marketing Science at Critical Mass, a program she designed and continues to run globally. She has 15 years of experience in the digital marketing industry with areas of expertise, including omni-channel measurement strategy and mix planning, performance analysis, and driving data-driven creative and strategy. She leads her department with a singular focus on delivering experiences that positively impact in-store and online sales for brands within CPG, automotive, financial, retail, consumer electronics, luxury, travel and healthcare segments.