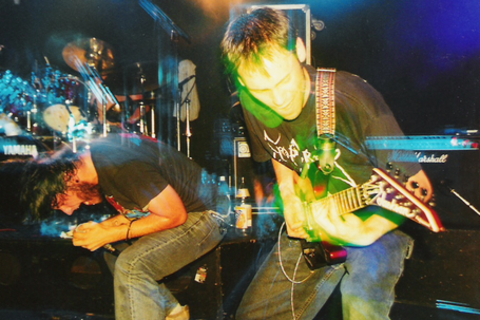 Before the internet changed everything, we discovered new music by sending self-addressed stamped envelopes to record labels found in ‘zines and searching record stores for bands we first heard in skateboarding videos. The effort that finding new bands required was also what made the discovery so feel special. At 15, Nathan started an underground band in suburban Pittsburgh; getting the band out of the suburbs meant forming partnerships. Nathan went on to lead a subversive media arts group and sing for tech-metal band Creation is Crucifixion; today, he runs art + engineering studio, Deeplocal. This meet up is an opportunity to revive the lost sense of serendipity that was wiped out by the digital revolution. Thinkers and makers interested in the reflecting on the underground culture of the 90s and its influence on contemporary creativity are welcome. This meet up is open to all badge holders, and complimentary adult beverages are available for those 21 and over.

Nathan Martin is the CEO of Deeplocal, an internationally acclaimed innovation studio that is most known for their work in art and robotics. Deeplocal spun out of the world¹s leading robotics school, Carnegie Mellon, and has been instrumental in shaping innovation in the ad industry. In less than three years, the organization has received awards that include AdAge Small Agency of the Year Northeast, Communication Arts Best of Interactive, One Club Best of the Decade, and Print Magazine Regional Design Award.
Prior to founding Deeplocal, Nathan was a founding member of an art group and a touring punk/metal band and spoke, toured, and exhibited internationally.

Nathan has received numerous awards and recognitions for his work in art, music, and technology and has been featured in Wired, Fast Company, AdWeek, and NOTCOT, and at events like AdAge Creativity + Technology, CES, 2600's H.O.P.E. Conference, and Yahoo! Provoke.