Cardboard Renaissance: Insights from Board Gaming 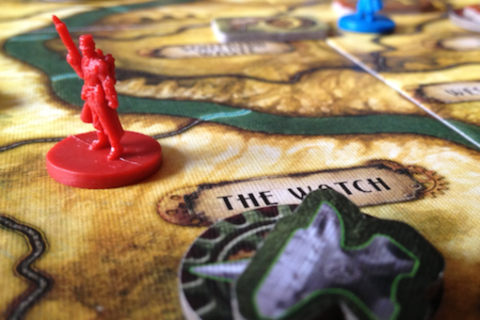 No longer a rainy-day pastime, board games are enjoying a huge resurgence of interest lately, a golden age of rich and engaging face-to-face entertainments driven by unique characteristics of design and publishing. As gamers have left Risk and Monopoly behind in favor of titles like Settlers of Catan (1995), Ticket to Ride (2004), and Bioshock Infinite (2013), the industry has seen an explosion of innovation and interest, with independent board game developers now pushing the envelope just as indie computer gamedevs have done. Yet the cardboard and computer game industries for the most part ignore one another, unless it’s to license a property across the divide. Join a panel of board game publishers for a deep dive into the cardboard renaissance, examining the important and revealing differences between tabletop and computer gaming, and looking at what both worlds have to learn from each other in terms of design, marketing, community-building and deeper ideas of fun.

Cory Jones is President and Chief Creative Officer at Cryptozoic Entertainment, where he has published board and card games based on properties ranging from World of Warcraft to The Walking Dead, Batman to The Big Bang Theory, and more, as well as a range of original titles. He was previously director of global business development and licensing at Blizzard Entertainment, and director of brand and new product development at trading card company Upper Deck. Most recently, he helped create HEX, Cryptozoic's massively multiplayer online trading card game, and will stop at nothing to see it released. Nothing!

Kristin runs a little game company called Looney Labs - which makes physical parlor games (not computer games) most notably the card game FLUXX. She is a geek at heart (and in training) and spent her first 15 years after college working as an Electronics Engineer at NASA and an IT Manager in the aerospace industry, all while also promoting and selling her husbands game designs in her spare time. In early 1999 she jumped off the cliff, leaving her day job behind to work full-time running and growing what is now a multi million dollar business with 8 employees! The games of Looney Labs are available worldwide, in large part due to Kristin's business and marketing savvy. The company has sold over a million copies of Fluxx! Kristin fosters the large community of fans known as "Looney Labs Game Technicians" who are spreading the word of Looney Labs far and wide. Kristin's earliest claim to fame came at age 16 when she solved a Rubik's Cube in 35.50 seconds on That's Incredible, and her enthusiasm for puzzles and games is still going strong. (Kristin is also looking for an app developer... http://www.looneylabs.com/RFQ)

Shut Up & Sit Down

Mark Wallace is an Actual Journalist who writes on occasion for the best board gaming site in the business, Shut Up & Sit Down. His work has appeared in The New York Times, Wired, Salon, GQ, The Escapist, and many other publications, where he writes about both tabletop and electronic gaming, among many other things. In addition, he has worked as a board game designer, a computer game marketer, and a startup CEO, as well as being the author of a book on virtual worlds, and a graduate-level instructor in the 5,000-year recorded history of games and gaming. He lives in San Francisco with his wife and ever-expanding family.

Co-founder and VP of Sales & Marketing at Days Wonder for the last decade, Mark Kaufmann previously spent 18 years in product management and marketing positions at various Silicon Valley start ups. Unable to stay focused on any one thing, he worked in fields as varied as 3D graphics software, Internet devices and game development engines. During his early "wild years", he misspent 7 years as a rock'n'roll radio disc jockey. His hearing has still not recovered...