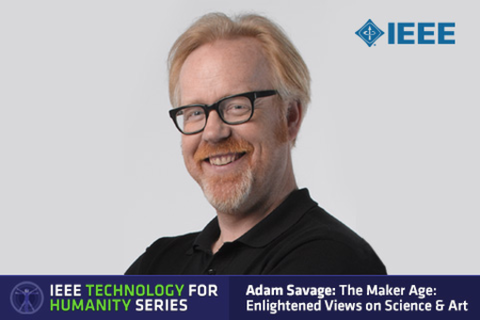 Western culture gears us to conceptually place art and science at opposite ends of a spectrum. When we think of art, we may culturally view it as a field where anyone can make their mark; a place of openness, expressiveness and accessibility. However, when it comes to science, we may be more geared to believe that it is a closed, uncreative and unexpressive field where only the hyper-intelligent can succeed. These ideas represent a gross misunderstanding of both fields and do society a grave injustice. Join Adam Savage as he explores the inextricable ties between art and science, dispelling these cultural myths, revisiting the Age of Enlightenment and highlighting luminaries like Leonardo da Vinci, a master of self-expression in the fields of both art and science. We’ll discuss how society may benefit from returning to the clarity that art can be just as rigorous as science, and that science can be just as creative as art. Part of the IEEE Technology for Humanity Series.

Adam Savage joined M5 in 2002 after receiving a call from former boss Jamie Hyneman to participate in a TV pilot, which turned into the wildly popular Discovery Channel series “MythBusters.”

Savage immersed himself in the NYC arts scene before moving to San Francisco in 1990 to parlay his skills into the thriving theater scene. There he worked for dozens of companies as set designer, prop master, art director and producer before falling into the machine art community where he learned welding, pneumatics, hydraulics, electronics and robot-building.

After exhibiting his work in over 50 art shows nationwide, Savage caught the eye of the special effects industry and began working as a prop builder and art director for major commercials for Sega, Coca-Cola, Nike, Burger King and Chevrolet. His work on a Coca-Cola commercial earned him a Clio Award nomination.

After a 18-month stint as head of research & development for startup toy company ZOOB, Savage joined George Lucas’ Industrial Light and Magic, where he worked on “Star Wars: Episodes 1 and 2,” “Galaxy Quest,” “Space Cowboys,” “A.I.,” “Terminator 3,” “The Mummy,” and dozens of commercials. During this time he also worked as model-shop supervisor for the two “Matrix” sequels as well as taught at the Academy of Art College in San Francisco.

Savage continues to dabble in his multiple hobbies, including passionately restoring his vintage four-wheel drive vehicle and accruing new pieces for his movie prop collection. He currently lives in San Francisco with his wife, twin boys and two dogs.