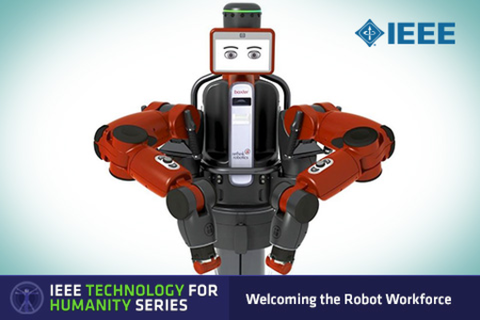 In the near future, humans will increasingly rely on robots to manage agriculture, infrastructure, transportation, healthcare, manufacturing and security. Advanced human-robot interaction will transform industries and change the way we think about the workforce. Telepresence robots like Beam, Vgo, and the iRobot Ava 500 will extend workforce robotics into the white-collar world, allowing workers to be physically present in two places at once and much more. And who knows what will happen as IBM’s Watson Robot finishes medical school? Will the robotic takeover of jobs help us become the best versions of ourselves, or lead to a depressing idleness that is economic, as much as emotional? Drawing from the lessons from automotive and manufacturing industries, do we have a responsibility to workers and ourselves to ensure the ongoing productivity of humanity? Can we keep humanity from turning into WALL-E? Part of the IEEE Technology for Humanity Series.

The National Institute of Standards and Technology

Elena Messina is the group leader of the Manipulation & Mobility Systems Group of the Intelligent Systems Division (ISD) at the National Institute of Standards and Technology (NIST). Her current responsibilities include oversight of major programs focused on standards and measurements for robotic and automation systems. Elena has over 100 publications and is co-editor of the book "Intelligent Vehicle Systems: A 4D/RCS Approach" and of the upcoming “Performance Evaluation and Benchmarking of Intelligent Systems.” Prior to joining NIST in 1994, Elena worked in private industry. She held several management and development positions at the Structural Dynamics Research Corporation, focusing on geometric and solid modeling products. As an engineer in the Industrial Robot Division of Cincinnati Milacron, she received patents for her innovations in robotic arc welding and trajectory planning.

Dr. Henrik I. Christensen is the KUKA Chair of Robotics at the College of Computing, Georgia Institute of Technology. He is also the director of the Center for Robotics and Intelligent Machines. Dr. Christensen does research on systems integration, human-robot interaction, mapping and robot vision. The research is performed within the Cognitive Robotics Laboratory. He has published more than 280 contributions across AI, robotics and vision. His research has a strong emphasis on "real problems with real solutions". He is actively engaged in the setup and coordination of robotics research in the US and worldwide. In 2011, Dr. Christensen received the Engelberger Award, the highest honor awarded by the robotics industry. He collaborates with institutions and industries across three continents. His research has been featured in major media such as CNN, NY Times, BBC, and others. He serves as a consultant to companies and government agencies across the world.