My Robot Poops - in JavaScript (with Web Sockets) 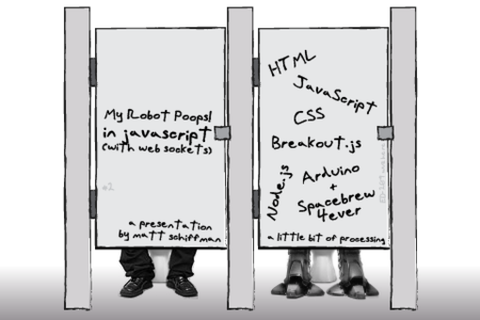 The popularity of hobby robotics and the maker movement is soaring, inspiring innovations in micro manufacturing and sparking creativity in DIYers worldwide.
For me, it all began when I built my son a toy robot for his 4th birthday. I crafted it from a piece of Snapware, an Arduino and other odds and ends, and made it controllable over the Internet. I proudly presented it to my son, who, a short time later, asked if I could build him one that poops.
Spurred by the challenge, a need to fulfill my child’s expectations, and my own (apparently passed-down) fascination with poop, I went to work and built him one. And now I want to teach you how to build one as well.
In this panel you will learn how to get started with Arduino, how to program your ‘bot using HTML, CSS & Javascript, and how to use Breakout.js and Node.js to tie it all together. You'll also discover some great resources to keep you inspired and learn about some exciting new technologies on the horizon.

A graduate of the University of Miami's BFA Theater Program, Matt began his career as a sound engineer/designer for acts including Jimmy Buffet and John Leguizamo. He built sound systems for the Broadway musical "Side Show" and the national tour of "Rent" and currently helps produce theatre for the Alex Lyras & Robert McCaskill writing team and Long Island based Silverhair Productions whenever he is called upon.

In his other life Matt specializes in user interface design and front-end development. He operates his consulting business Darrow Digital Media, Inc. out of the Brooklyn Creative League shared office space in Brooklyn, New York. He labels himself a Creative Technical Generalist and executes more than he ideates… most of the time.

In April of 2012 he started exploring physical computing. Since then he has built 3 toy robots for his son - Flippy, Dookie and #2. He has presented his creations at National Robotics Week NYC and is looking forward to presenting them here at SXSWi 2014.