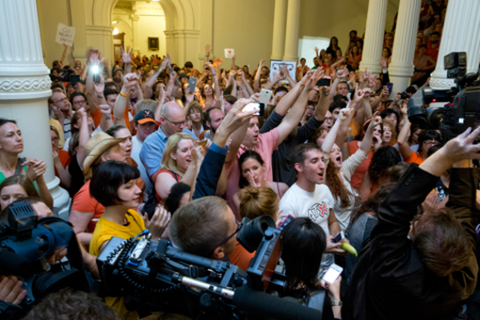 The best night of television in the summer 2013 wasn't TV at all. Rather, it was a livestream of the ultimate reality TV – an old-school, 11-hour filibuster in the Texas Senate. Nearly 200,000 concurrent viewers from 187 countries – more eyeballs than CNN or MSNBC have on most nights – tuned into a YouTube livestream published by The Texas Tribune, a non-profit, non-partisan online news organization that many of those 200,000 had never heard of before that night.
In this presentation Rodney Gibbs, the Tribune's chief innovation officer, details the secrets that helped the livestream go viral. From negotiating rights to carry the Texas Senate proceedings to encoding the feed for YouTube, from juicing public interest with social media to converting livestream viewers to ongoing Tribune users, Rodney delineates the technology and tactics behind developing and scaling streams of live events. He ends by demonstrating the next phase of the Tribune's mobile livestreaming technology.