How to Shoot Stunts and Action on a Budget 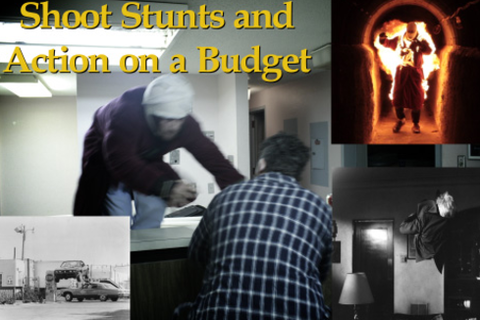 Come learn the basics of action and stunt fighting from legendary stuntman, stunt coordinator and director for over 35 years, Bobby Sargent, who has performed many of the most spectacular stunts in motion picture history. Learn what makes a hit, and what sells it, what makes the action sequences we love work. Learn the basic rules for creating and shooting action, basic safety, blocking choreography, how to do good looking action on a low budget. Mr. Sargent will go into his wide experience in preparing and improving action for the many great directors he's worked with, and demonstrate the basics using trained stunt people, and members of the audience.

Bobby Sargent has been a stuntman, stunt coordinator and director for over 35 years and has performed many of the most spectacular stunts in motion picture history. He comes from a background as a World Champion Athlete in trampoline, gymnastics, professional springboard diving and high diving. Representing the United States on numerous world teams, he holds a succession of major titles including, AAU National Champion, Gold Medalist in the America Cup World Championship in Mexico City, World Professional Spring Board Diving, Word Record High Dive (of 157 feet) and the Acapulco Cliff Diving Championship. Bobby has been featured and appeared on ABC’s Wide World of Sports, Sports World and other sport productions. At 22, he owned and operated his own gymnastics school and conducted workshops throughout the world. He was voted one of the Top Ten Coaches in the United States and also served for six years as adviser to the President’s Council on Physical Fitness.
After introducing new and innovative stunts, fresh ideas and ways to apply his extensive background with cars, boats and motorcycles he was offered the enviable position as stunt double for Burt Reynolds. He performed as stunt coordinator and second unit director on many films with Mr. Reynolds including Smokey and the Bandit, Cannonball Run, Sharkey’s Machine, Stick and Rough Cut, etc. creating many of the action sequences seen in these and other action films including First Blood, Uncommon Valor, Police Squad – The Naked Gun and Dazed and Confused and over 50 other popular films. He became a most in-demand writer/creator of action sequences working with top producers and directors in the industry including Francis Ford Coppolla, Harvey Weinstein, Hal Needham, Don Siegal, Carl Reiner, Joe Dante, Ted Kotcheff, Steven Soderberg, Chris Columbus, Peter Bogdanovich, John Millous, David Marek and the Zooker Brothers to name a few. Aside from Burt Reyonlds, he has created and performed stunts for such stars as Kirk Douglas, Jackie Chan, Nick Nolte, Roger Moore, Sylvester Stallone, Don Johnson, Ben Johnson, Leslie Nielsen, Ben Affleck, Daniel Baldwin and Peter Fonda etc. etc. He was also featured in seven different television specials for Stunt Coordinator and Action Director. He has been featured in the books, “Burt Reynolds Life Story,” Jeff Bridges book “Making Texasville,” and “Hollywood Stunt Performers.” He is a member of the Hollywood Stuntman Hall of Fame in Moab, Utah.
Bobby’s work in this extremely competitive industry has been a classic climb to success and he is recognized by the industry for his competence, integrity and his extensive knowledge. Responding to the suggestions and urging of some of the actors and producers referred to above he formed TXSTAR entertainment in 1998 in one of the industry’s most popular locations Austin Texas. TXSTAR is a fully functional feature film, television and high definition production company that has produced or co-produced and provided equipment, crews and above the line talent etc. for over 16 years. Mr. Sargent is known as someone who gives back to the industry. At the request of the Screen Actors Guild he conducted seminars in the most active states for SAG employment. Texas, New Mexico, Louisiana, Georgia, Florida. His most edifying contribution To the Screen Actors Guild took place in 1977 when he was a founding member of the Screen Actors Guild’s Stunt Safety Division. The Stunt Safety Committee created the rules and guidelines for Actors, Stunt Coordinators and Stunt Performers for all SAG projects.
Mr. Sargent has also been instrumental by sharing his expertise in all facets of the industry by helping upstart companies, projects and personnel to avoid the pitfalls that inexperienced people or companies are subjected to.
Bobby brings to every project his experience and expertise in producing, directing, action direction and stunts, his knowledge of the inner workings of the film industry and most importantly, his ability to be world-class in everything he does.

Born in Mozambique in Africa and raised in Portugal, Val has been writing since the age of 5, when he uncovered an old typewriter around the house and began producing poems and snippets of stories. The typewriter became a computer, and fiction and poetry writing gave way to lines of computer code and sales presentations, but neither were abandoned. In time Val began turning poems into song and story fragments into full pieces.

Val now lives in Austin with his beloved wife Rita, writing and directing his own screenplays.

In 2005, his short story, "Kayla," won an award at the 2005 Scary Stories, produced by the Celebrity Centre International Professional Writers Association and performed live by professional actors for a live audience.

He optioned his first script in 2007 and in 2008 started work on his first Web Series, 7 Shades of Lenity. In 2009 he wrote, shot and directed a short on Human Trafficking, titled "When She Smiles."

Coupled with his goals to have friends all over the world, bring an end to war, stop Human Trafficking, are his dedication to the US Constitution and the principles of Freedom taught by the Founding Fathers.

For him, America is still the Land of the Free, especially having come from other countries where people have a lot less freedoms, but he's keenly aware that Constant Alertness and Constant Willingness to Fight Back are the only Price of Freedom.