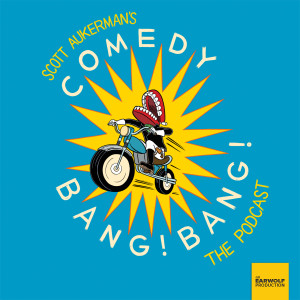 Join host Scott Aukerman (“Comedy Bang! Bang!” on IFC, “Mr. Show”) for a weekly podcast that blends conversation and character work from today’s funniest comedians. While Scott begins by traditionally interviewing the celebrities, the open-door policy means an assortment of eccentric oddballs can pop by at any moment to chat, compete in games, and engage in comic revelry.

Scott Aukerman, also known as Mott Skokerman, Hot Saucerman or Scottabot, is the host of Comedy Bang Bang: The Podcast! Scott began his comedy career as a writer and performer on Mr. Show. Following the success of Mr. Show, Scott co-founded the popular UCB show that would later become Comedy Bang Bang: Standup. One of Scott's most well-known ventures is the FunnyorDie series Between Two Ferns with Zach Galifianakis, which he co-created. Listen to Scott on Comedy Bang Bang every Monday on Earwolf, and watch him on the third season of IFC’s Comedy Bang! Bang!, airing later this year.