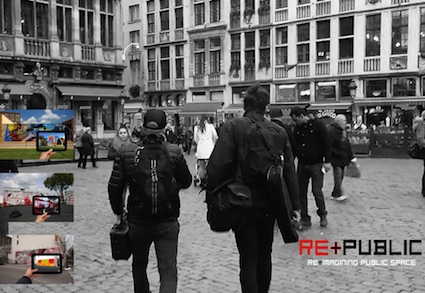 A creative collaboration between The Heavy Projects (Los Angeles) and PublicAdCampaign (New York City), Re+Public is born out of a mutual interest in democratizing access to our shared visual environment. Re+Public uses emerging technologies, and mobile device augmented reality in particular, to alter the current expectations of urban media and accomplish our core mission of re+imagining public space through site specific collaborations and mural installations that use narrative and interactivity to explore the possibilities beyond static 2D art.

Through academic discourse, grassroots activism, and street-level tech deployments, Re+Public has sought to disrupt the unequal balance between outdoor commercial imagery and public expression. In line with this ideology, we will discuss how augmented reality has been used, and can be used in the future to leap the private property boundaries that control public space access by allowing a layer of openly accessible digital expression to exist on top of physical environments.

Deriving his pseudonym from his penchant for philosophical discussion, Heavy possesses an interdisciplinary background that comprises technology, academia, and the arts. With a PhD in Humanities [ Intermedia Analysis ] from the Universiteit van Amsterdam, he has worked as both a university professor and a tech developer in Anaheim, Prague, and Saint Louis. Since 2007, Heavy has internationally presented his academic work, which explores augmented reality, art and semiotics in public space.

As a kind of synthesis between scholarly inquiry and emerging media, Heavy founded The Heavy Projects to investigate how the fusion of creativity and technology can uncover new modes of relaying ideas. Building upon existing technological and theoretical frameworks, Heavy creates innovative interfaces between digital design and physical worlds in ways that provoke the imagination and problematize existing styles of art, design, and interaction.