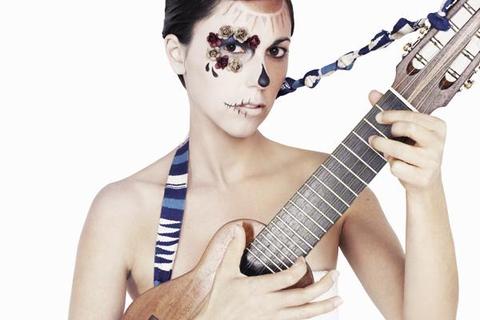 For her SXSW debut in 2010, Gina Chavez received national recognition from NPR’s “All Songs Considered” and “Alt.Latino” as one of the new Latin artists to watch. Now with the release of her sophomore album, Up.Rooted, she brings forth a powerful collection of songs that have received praise from The Boston Globe, USA Today, NPR, and a four-star review in The Austin Chronicle. Chavez uses this second album to vocalize the dichotomies of her life as an ethnically mixed American woman trying to decide, and embrace, who she is and where she belongs. She ends up defining what “Americana” really means; it’s really the indigenous roots music of the Americas, America as a melting pot and America as the avenue for freedom.

Produced by Michael Ramos, known for his work with Patty Griffin, John Mellencamp and the BoDeans, Up.Rooted is a garden of delights on which Chavez delves into cumbia, bossa nova, vintage pop, reggaeton and other genres. Her wide-ranging vocals convey delicate beauty and sharp social commentary with equal nuance, giving the album a dynamic balance between dramatic tension and relaxed grace.

As one of Austin’s most beloved world music/indie artists, Chavez is known for her impressive multi-instrumental performances and an inimitable sound inspired by her travels. With accolades such as the 2012-13 Austin Music Award for Best Latin Traditional Artist/Band (along with placing in three other categories), two tours in Japan as the Official City of Austin Music Ambassador, and praise from National Public Radio‘s All Songs Considered and Alt. Latino as one of eight “New Latin Artists at SXSW,” Chavez has claimed a prominent stake in the Live Music Capital. She is back from eight months of mission work in El Salvador and established Niña Arriba, a college scholarship fund for girls she lived with in a gang-dominated part of San Salvador. Southern Living and Olay named Chavez one of 11 “southern iconic women who have left a beautiful footprint across the South.”