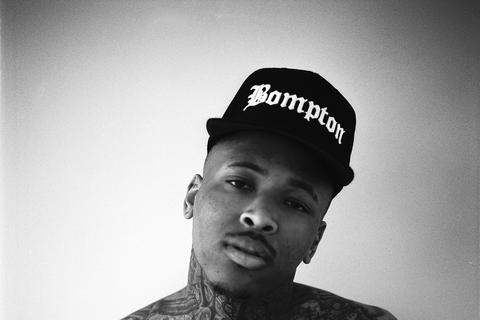 “I’m giving off that same energy that Dr. Dre and Snoop Dogg were giving off to the world,” YG explains. “I really brought that back. I’m doing that and living that. That’s what you’re going to get on the album.”

YG is talking about My Krazy Life, his debut studio album, which is slated for a March 18th, 2014 release. The hard-hitting collection features the Compton, California rapper breaking down the intricacies of Southern California living over the hard-hitting production of DJ Mustard, who has helmed several of YG’s biggest hits, as well as cuts for Tyga (“Rack City”), 2 Chainz (“I’m Different”) and Jeezy (“R.I.P.”), among others.

“It’s basically all my life on 10,” YG reveals of My Krazy Life. “It’s all Mustard on 10. Mustard feels it’s his best production so far and I feel like it’s my best songwriting so far. I’m giving everyone the young, black, West Coast culture. I’m giving you that in its rawest, purest form.”

My Krazy Life is buoyed by the Platinum “My Hitta,” a Top 20 single featuring Jeezy and Rich Homie Quan. The music video has garnered more than 50 million views on YouTube. YG says that “My Hitta” has resonated with people because of it represents brotherhood. “That’s a friendship record, so everybody feels that,” YG says. “Everybody’s got homies that they feel like they’re down for. All the females got their homegirls, their best friends, so that’s just a song the whole world can relate to.”