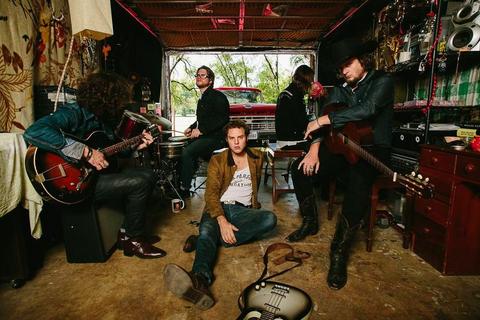 Texas-bred Sons of Fathers will follow up their critically acclaimed, self-titled debut with 'Burning Days,' out April 2 on Blanco River Music. Helmed by legendary producer Lloyd Maines (Joe Ely, Uncle Tupelo), the record's ten tracks find the band's deep American roots blossoming with vines of sonic Texas power, ragged rock, and punk defiance, all wrapped around the "airtight harmonies" (Austin Chronicle) of frontmen David Beck and Paul Cauthen. Maines put it best when he described the band as "The Everly Brothers meets Neil Young and Merle Haggard and The Clash." Rolling Stone has already praised the album's "wide open roots and folk rock," while CMT described it as "rip-roaring Texas rock studded with gospel-influenced harmonies," and Paste called it "soulful."

Though Sons of Fathers is one of Texas' most talked-about emerging artists (eMusic named them one of 12 hot new acts to watch), their sound is generations in the making. Cauthen, a native of Tyler, Texas, began singing in the church at the age of seven and learned guitar from his preacher grandfather. "Granddad was a hell of a musician," he says. "He chose the Church of Christ instead of the church of rock and roll. I remember learning to sing harmonies in the bathtub at six years old." Cauthen wound up in reform school as a youngster and turned 20 doing time on a Texas chain gang, all the while honing his chops as a songwriter and storyteller.

Beck was raised in San Marcos, Texas, the son of Bill Whitbeck, a renowned touring bassist with Robert Earl Keen. As a youngster hanging out on tour buses and in studios, Beck witnessed the ups and downs of the music business from an early age. "It was a different lifestyle for a young son. Dad was always on the road for business…But what my dad did was make it a natural deal to play music. It wasn't strange to me."

"We’ve learned from what our fathers and grandfathers have done and put those lessons into our lives," Beck continues. Those lessons passed down across generations provided a fitting foundation for the band and inspired their name.

Sons of Fathers released their self-titled debut in 2011 and earned immediate notice from critics around the country. The Wall Street Journal praised their "tight, heartfelt vocal style," while NPR's World Café called them "bold" and "powerful," and WXPN described their music "nothing short of moving."

The catalog they've written reflects elements of all their most righteous influences. Be it a country shuffle reminiscent of Robert Earl Keen, an Americana folk song steeped in the lyrical weight of Bob Dylan, or a genre-bending tune recalling the Beatles, Sons of Fathers possess something unique. "Our favorite songwriters are the most timeless ones: Dylan, Paul Simon, McCartney, Lennon, Joni Mitchell, Crosby, Stills, Nash, & Young," sasy Cauthen. "We also love the Texas writers: Robert Earl Keen, Willis Alan Ramsey, Roger Miller."

The music of Sons of Fathers is not only timeless, but a timely reminder of how great music can be.