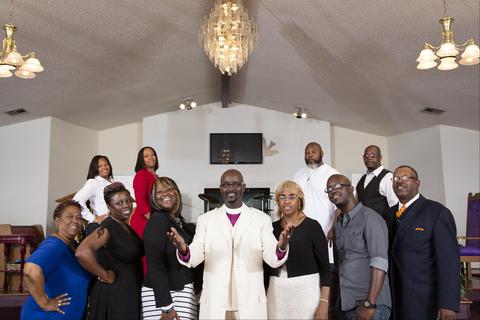 "The Spirit Speaks" produced by John Croslin and Eric Friend of the Reivers hits the national scene in early spring 2014.

The Jones Family Singers, who consist of five sisters, two brothers and their father, have been wrecking churches and festivals alike for over two decades. But they’ve never before made a studio album that displays the depth of their pure musical gifts quite like The Spirit Speaks.

Before they ran tape on the Pentecostal Jones family at Jim Eno’s Public HiFi studio in early 2013, producers Croslin and Friend pored over all the group’s previous recordings- dating as far back as the late ‘80s and mostly recorded live in church- and chose what they felt was the strongest material. “Some of these songs we haven’t played in 20 years,” exclaimed Bishop Fred Jones, the family patriarch, who has resided over the congregation at Mount Zion Church of God In Christ in Markham for three decades.

Croslin and Friend also recorded newer songs, such as the Bishop’s “Try Jesus” and Fred Jones, Jr.’s “Going Home,” to get the full representation of the band that has wowed crowds at ACL Fest and SXSW a total of eight times.

The producers had never worked with a gospel group before, but in the rich sound of the JFS they heard R&B/funk with lyrics of praise. Musical director Fred Jones Jr. - the group’s most valuable player- deftly handles guitar and keyboards and his sisters lock in on harmonies like God’s own Vandellas. Yes, it’s gospel music, but fans of such nouveau soul bands as Sharon Jones and the Dap Kings and Vintage Trouble will also find a soul workout at the core.

Impressed by the band’s fervor onstage and humility off, Austin filmmaker Alan Berg (“Outside Industry: The Story of SXSW”) decided in 2012 to make a documentary that explored the triumphs and tribulations of this working gospel band. The artistry he witnessed onstage, as well as his film’s soundtrack, deserved some time in a world-class studio with experienced producers, so the band took off from their day jobs for a three-day weekend in Public HiFi in Austin. The original goal was to record a couple new tracks for the film, but the project soon yielded a full-length LP that has inspired more than one gospel enthusiast to exclaim that “nobody’s making records like this anymore.” The Spirit Speaks is a throwback that can really throw down.

Buoyed by the new LP, the Jones Family are eager to hit the road. Besides churches, nightclubs and big music festivals, they’ve also brought their musical ministry to prisons.