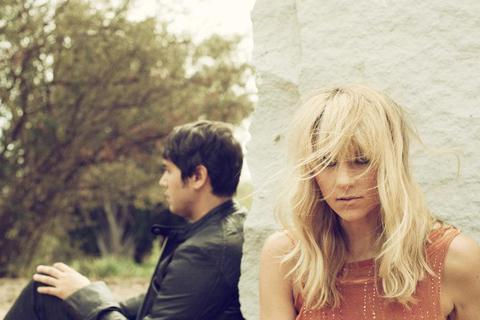 “We were driving around with friends and someone said ‘I smell a bonfire,’” recalls Erica Driscoll, lead vocalist-keyboardist-guitarist of the brother-sister duo Blondfire. “We thought they said ‘Blondfire,’ and at first we kind of jokingly said it should be our name – but it stuck. We liked the fact that it was masculine and feminine at the same time. It represented who we are in a cool way.”
That push-pull of elemental forces is fundamental to the siblings’ sound. Winsome, melancholy vocals and ’80s-influenced melodies float atop shards of guitar and propulsive beats, leavening Blondfire’s infectious pop tunes with real punch. Alternately haunting and ebullient, their debut Young Heart represents the purest example yet of Blondfire’s unique musical hybrid.
“We tend to write sweet, dreamy melodies,” agrees guitarist-drummer-sequencer-backup singer Bruce Driscoll, “and having a rhythm section that’s more aggressive – and not too straight – gives it that gutsier, edgier feel.” Like Erica, Bruce grew up loving bands like The Smiths, The Cure and New Order. But when it came to drums, Led Zeppelin skinsman John Bonham always occupied a special place in his heart.
The formula has resonated strongly with listeners. Blondfire became the first unsigned act to hit the #1 spot on the iTunes Alternative chart and one of very few unsigned bands to be added to the Sirius Alt Nation playlist, on the strength of the evocative, bouncy “Where The Kids Are” and its arty video. “I submitted that song to a few blogs and it just took off online,” Erica marvels. “According to Hype Machine, we became the #1 most talked-about band on the internet!”
“Where The Kids Are” is the lead single on the self-produced Young Heart, most of which they wrote and recorded, Bruce reports, in “about a week” at his home studio and Hollywood’s historic Wax Studios (formerly TTG). The set was mixed by Wally Gagel (Muse, Folk Implosion, Gorillaz). “Wally mixed ‘Kids,’ and he has a great grasp of what we’re about sonically,” volunteers Bruce. “He has a real knack for pressing the ‘sound big’ button.”
Young Heart is the duo’s first full-length album since their 2008 indie release My Someday. In the interim, the band has developed a homegrown following in Los Angeles through live residencies and radio airplay from KROQ, KCSN, 98.7 and KCRW. Their music has also been heard in the films Besties and Get a Job; on TV via ESPN’s Australian Open Tennis, The Client List, MTV’s Awkward and The Collection and in an ad for Ecco shoes.
Bruce and Erica grew up in Grand Rapids, Michigan; their U.S.-born dad plucked classic rock and pop on the guitar, while their Brazilian mom – a classically trained pianist – exposed them to bossa nova and music lessons. By her teens, Erica was mad for ’80s pop and teaching herself guitar.
Bruce was initially obsessed with film soundtracks, which no doubt ultimately contributed to Blondfire’s emotionally vivid musical textures. “My dream was to score a Batman movie someday,” he remembers. Later he got into drums (partly as a rebellion against piano lessons); although he soon switched to guitar, he retained his preoccupation with beats.
“Once Bruce started playing guitar, that’s all we wanted to do,” Erica says. “In Michigan there isn’t much to do, especially in winter. So we just holed up in the basement, writing songs and recording them on our 4-track machine.” They began gigging soon after.
And that Brazilian thing? “You can hear it a little in the way we use melodies,” Erica muses, “and in the way that Bruce likes to put all kinds of variations into his beats.” Bruce adds that he leans toward certain chords that lend a melancholy feel one could trace back to Jobim and other Brazilian songwriters. “It’s not obvious,” he says. “But it’s in there.” And just part of the one-of-a-kind recipe that makes Blondfire sound like nothing else.