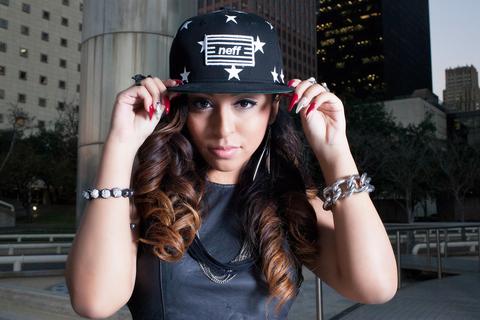 The 20 year old MC/Singer brings a new dimension to the urban female artist arena. She is brilliantly versatile with an ability to switch styles and moods throughout a string of records that bounce from R&B with candid and confessional lyrics to tracks where she’s straight out wrecking the mic.

Aye Yo Smiley is definitely looking to prove she's a strong new contender as she steps into the ring dropping singles and videos left and right off her new mixtape set to drop this summer. Her style catches your attention right away, just based on the cocky self-assured nature of her music. At first, it makes you react like, 'Hold up Ms. Smiley, who do you think you are flowing like that? We weren't ready for that!' But when you really listen to her flow, you can see that the perceived "cockiness" is in fact an expression of a very positive self-confidence.

"When I wrote 'Whoa There', I was thinking about all the people that didn't take me seriously, tellin' me that I don't have what it takes. You don't wanna go there sweety. This cocky attitude suddenly took over me and I just started spitting. I'm not a cocky person, but I have every right to be self-confident. I put in work! Nobody can tell me nothing!", laughs Smiley.
Born to her Peruvian parents, Aye Yo Smiley grew up in Washington D.C. At the age of 15, Smiley was influenced by a variety of music like Selena, Aaliyah, A Tribe called Quest, and the music of TLC, specifically Left Eye, which inspired her to take up rapping. Although, being a female MC was a struggle throughout high school, Smiley kept at it and continues dedicating herself to her music. At the age of 17, Smiley knew it was time to take music seriously. She began developing her sound and flow by performing at community open mics as well as filming videos for her YouTube channel.

Aye Yo Smiley received a lot of attention from the video to her single “Bang Bang”, which premiered in October, 2013 on Mun2, the nations #1 Hispanic cable network and listed on the front page of WorldStarHipHop.com, where she introduced her skills with fellow lyrical chopper, Kleva and his Htown entourage.

In December of 2011, her homemade YouTube video, "93 'til," received over 4,000 views in less than a day. Today, that video has received over 30,000 views and continues to reach more fans across the country. Smiley is an emerging innovative artist on the road to great success. This is just the beginning for her and she is definitely one to watch.