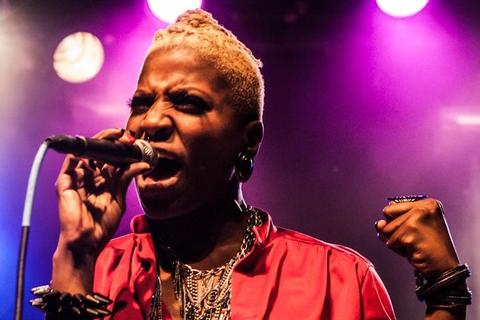 SATISFYING AND SOULFUL. RAW AND RAUNCHY. INSPIRING, TANTALIZING AND SCANDALOUS. DRIPPING WITH SENSUALITY.

There’s Rock n’ Roll. And then there’s the Rock n’ Soul of buzzy Toronto-bred vocalist Saidah Baba Talibah, daughter of Tony and Grammy Award-nominated icon Salome Bey, “Canada’s First Lady of Blues”. Strong bloodline notwithstanding, Saidah is a fierce artist that isn’t afraid to combine rock/funk/soul in all of her performances!

After being handpicked as one of the “best new Canadian acts” to showcase for Asian music executives at Music Matters in Singapore, showcasing at MIDEM (Cannes), snagging a slew of prestigious music festival bookings from Trans Musicale (France) and Reeperbahn (Germany), all the way to Afro Punk (USA), it’s clear that while her early musical output is ahead of its time, she is looking to command respect today.

With a Grammy-nominated uncle (Andy Bey) who was once cited by John Coltrane as being his favorite vocalist, producing unoriginal vocal music and lackluster live shows that lack high artistic integrity was just never an option in her mind. Whether channelling a new school Betty Davis 2.0, or conjuring up images of high wire, genre-defying acts like George Clinton or Fishbone, Saidah’s penchant for producing live concert experiences that are both raw and real typically provoke a WTF (“What The Funk”) reaction – like most good art should.

While (S)cream’s artsy and accessible musical template got you “High”, took you to a “Place Called Grace”, and made you wanna“(S)cream” right after you moaned “Good Morning Baby”, Saidah’s much talked about follow-up 2012 digital single “Revolution” (as heard in the 2012 Chevrolet Volt commercial) is a song recorded to keep her hardcore faithful happy as she works towards completing her sophomore full length “concept” album steeped in blues-rock sounds, slated for an early to mid 2013 release.

Saidah is now known as a rare breed of crossover performer whose music, much like songs on your iPod playlist, could simultaneously play to alternative music lovers, across genres. Not a surprise, given that her musical hybridity was formed in Toronto, arguably the most multicultural city on the planet. “I growl. I purr. I go to pretty places, harder places and naked places in my music,” she says embracing such contradictions. “I wish you joy, despair, heartbreak, inspiration and to be turned on.”

Boasting striking good looks, sartorial splendor (just google her), and a flamboyant image that actually matches her talent, whether in the studio, or live on stage, Saidah marches to the beat of her own drummer. Her preternatural punk attitude, which has seen her recording songs on her smart phone for The Phone Demo’s 2009 pre-release, to championing a raw vegan / healthy food lifestyle, the sky is her limit. Forward thinking, but rooted in old school sensibilities gleaned from her Grammy Award-aligned lineage, Saidah produces hard rocking outsider music, with insider charm. And if there’s one thing you can say about Saidah – there’s no other musician that sounds, looks or feels like her.