(RAS) Riders Against the Storm 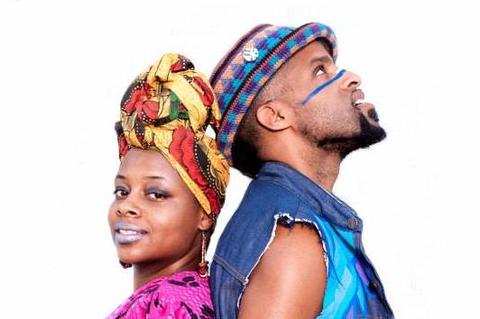 Under the banner of "Party 'Til Dawn" stands Riders Against the Storm (RAS), curating a magical experience, for whatever audience is in attendance. The award-winning husband and wife hip-hop duo do more then put on a hair-raising show. There is the sense that the unseen currents between everyone within radius of the stage has been turned on electrically - as Chaka Mpeanaji and Tiger Lily humbly accept their role as conductors.

Chaka is a man with the knack for structural development and raw urban art with mystical edges. His career stretches from teaching in High School classrooms to guerrilla art installations, from promoting youth entrepreneurship to outfitting trendsetters with his NefrFreshr (Never Fresher) clothing/accessory line. All of these qualities are visible in the platform that has been set for Riders Against the Storm's reach and growth. A native son of Pittsburgh, Mahone finished his formal education in Providence, RI. There he spent countless hours in the community organizing, and uplifting the possibilities of the deserving "underserved". While in Providence Rhode Island, he met his wife, and magic ensued.

Tiger Lily is a performance artist, lyricist and healer. Her healing work focuses primarily on young women; urging them to abandon thoughts that stand against their innate power. Her performance exudes the same to all that are present at any show. Tiger Lily was born in Brooklyn to an undeniably charming Haitian family. Her lineage is strewn with patriots/liberators, mystics and coquettish elegance. Family dynamics brought Tiger Lily to Providence RI, and organically into the alignment of the century with Chaka Mpeanaji.

While in Providence, RI they recognized their role in the shifting of communities. Their presentations became the art of bringing people together. While communing with group after group, they soon saw how much more easily people were motivated and open for information. They later found out that that was the essence of ceremony. They crafted their signature experience and moved to Austin, TX to spread their offering to "The City of Music".

Their journey's through the self-proclaimed "Land of the Weird" brought them continued success. In 3 years, they not only grew a cult following for Riders Against the Storm, but also Body Rock, an underground dance party developed by the duo and DJ Chorizo Funk. In everything they touch, ceremony scrapes the floor and atmosphere. As performers and conduits, they are called to bring the ceremony back to the party. Their new self-titled EP is packed with their crisp and swift agility through a variety of soundscapes and genres. Hopping through, from seam to seam, cloked in their own ideas of regalia and change, Riders Against the Storm cast out invitations to world - come and party.