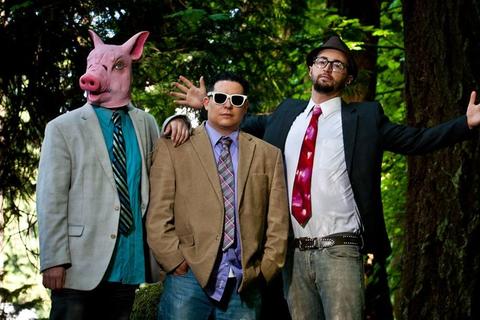 The Chicharones, were formed at the South by Southwest Festival, when Sleep and Josh Martinez were just two ambitious guys trying to make it big. On the verge of their own solo careers, the two artists combined forces, and in the following decade, toured the world, sold over a 100,000 albums, and solidified their place as one of the best live shows in underground hip hop. They’ve licensed songs to NBA, MTV, ESPN, The Movies and multiple TV shows. Over time, the Chicharones have also become adults. After three years in the studio, they have created a living ode to the trials and tribulations of their 20s and the party that just won’t die.

“The Best Bar Band in America” The Chicharones have toured the world, solo and with live bands, and perfected their sound, with over a decade spent in airplanes and in crowded tour vans, fighting to make something of themselves for the people they left behind. From Sleep’s magic tricks and quick change routines, to Martinez’s beer balancing and hi-kicking Elvis dance moves, The Chicharones have become legends for their unique sound and one-of-a-kind live show. Spin called The Chicharones “The Best Bar Band in America”. Using humor and harmony, they’ve created something entirely new, pushing the boundaries of what hip hop sounds like. Expect 5-part harmonies, speed raps, a razor tight band, costume changes, syncopated dance moves, stage magic, standup comedy and the joyful interplay of veteran performers Sleep and Josh Martinez as they constantly raise the bar on what live performance can be.