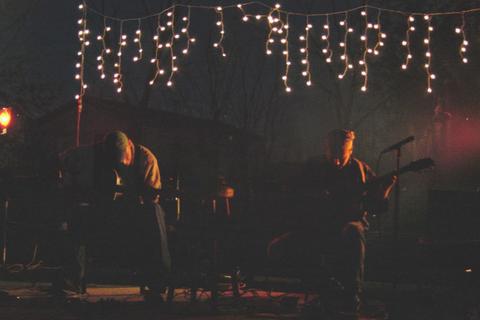 FiRES WERE SHOT is Clay Walton and John Wilkins, who formed the group in 1998. With influences ranging from Flying Saucer Attack to fellow Austinites Stars of the Lid, and armed with little more than their acoustic guitars and a few effects pedals, Walton and Wilkins are dedicated mappers of post-rock ambient soundscapes and pioneers of noise-folk vignettes. The band’s first recording, the self-produced, self-released Form the Hearth, is a collection of four-track recordings that the duo laid down while learning the basics of their instruments. After extended writing sessions at Walton’s country home just south of Austin, the duo sent the results to labels around the country, including San Francisco experimentalists Asphodel (DJ Spooky, John Cage), which released the group’s next album, Solace, in 2004. In 2011, they released the LP Awakened by a Lonely Feud on Austin’s Quiet Design label, followed by the self-released long-form single, Maritime, in 2012. The group’s fifth release, Pieces of the White Sun, appeared in late 2013 on It's Only Me Records.