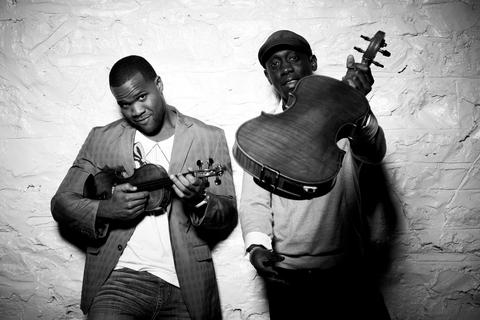 When Wil B and Kev Marcus of Black Violin hit the stage, it’s an unusual sight in the contemporary music scene that demands attention. The classically trained violinists appear more Biggie than Beethoven as they blend their skills with hip-hop, R&B, and pop music. Last year’s appearance at SXSW, including opening for Dave Grohl’s keynote speech, caught the industry’s attention, and now they return once again with violins and bows in hand.

The duo plays numerous shows throughout the Interactive and Music portions of the festival (full schedule below). Attendees can also catch them in the Austin Convention Center on Wednesday. Having opened last year’s panel celebrating the 50th anniversary of The Beatles, this year they open the panel recognizing 50 years of the Rolling Stones. Kev will be a guest speaker on the panel Rules: Defying Genres in the Music Biz.

Music diversity is at the heart of Black Violin. They accompanied Alicia Keys’ performance of “Karma” at the 2004 Billboard Awards, appeared with Gym Class Heroes and Fall Out Boy’s Patrick Stump playing the hit song “Stereo Hearts” for VH1’s Unplugged, and played with Linkin Park member Mike Shinoda’s Fort Minor, while opening for Fat Joe, Akon and the Wu-Tang Clan. Individually and together, Black Violin has collaborated with the likes of P. Diddy, Kanye West, 50 Cent, Tom Petty, Aerosmith, Aretha Franklin, and The Eagles. Kev supplied strings for a track on Lupe Fiasco’s Grammy-nominated Food & Liquor 2 album and appeared on the Meek Mill cut “Maybach Curtains” with John Legend, Rick Ross and Nas.

Since starting Black Violin a decade ago, Wil and Kev have performed an average of 200 shows a year in 49 states and 36 countries. Highlights include appearing at official NFL celebrations for three Super Bowls, last year's U.S. Open in Forest Hills with Jordin Sparks, and the 2013 Inaugural Celebration in DC.

Black Violin’s most recent album, Classically Trained, is the follow-up to their 2007 self-titled debut.