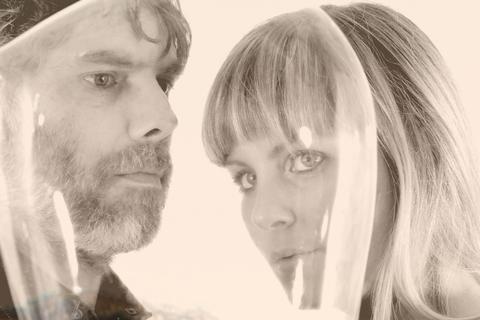 Gulp is Guto Pryce (Super Furry Animals) and Lindsey Leven, with Gid Goundrey providing guitar and Gwion Llewelyn (Race Horses) on drums. Fuzzed-up bass, dream-folk vocals, acoustic and electronic drums and synths…their cinematic and ethereal sound is a musical manifestation of the road trip; the landscape and events along the way, filmic scenes and melodies – from the sun-squinting, flickering saturation and lens flare of the Californian desert to the gloamin of rural Scottish and Welsh homescapes.

June 2012 saw the release of their debut single, Game Love, which received a 5* review from Artrocker magazine and pick of the week in The Guardian Guide.

In late 2012 Gulp toured the UK and Ireland supporting Django Django and also contributed to the Django’s Hi Djinx! remix lp with a cover version of Hand of Man.

A second single ‘Play’ was released July 2013. Gulp are currently working on an LP due to be released in Spring 2014.