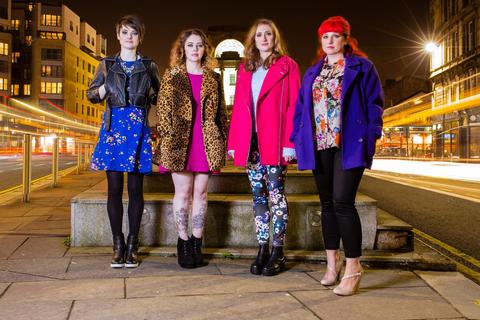 The Cairn String Quartet is an experience like no other – four of the UK's elite string players coming together to create a unique and inspirational orchestral show with a twist.
The quartet perform all genres of music on classical instruments – expect Bach to Bowie, Ravel to Radiohead, Mozart to Muse, Lady Gaga, Guns ‘n’ Roses and many more, excelling in sets originating from their Scottish roots. Pop and rock princesses at heart, the four ladies are passionate about music, write and arrange their own material and work with new artists across the musical spectrum. Their work can be heard on NBC’s show Smash, on adverts, including a recent L’Oreal advertisement played during the NFL Superbowl and on MTV.
Famed for their collaborations, Cairn String Quartet and alter ego Electric String Orchestra has performed with artists throughout the UK, Europe and South America, including; appearances at Glastonbury, T in the Park, on BBC Radio 1, alongside Professor Green and Emeli Sandé at the MOBO Awards in 2011 and 2013. They toured and appeared on stage with Echo and the Bunnymen during their 2011 Ocean Rain tour, and performed for the 10th anniversary of the Scottish Parliament, attended by HRH Queen Elizabeth II.
This past year the quartet was nominated for the Nordoff Robbins Big Apple Award and collaborated with Miaoux Miaoux, Jonnie Common, Emma Pollock, RM Hubbert, Malcolm Middleton, Aidan Moffat and Bill Wells, There will be Fireworks, Call to Mind, Dam Mantle, Maeve O Neill, Lisa O Neill, James Yorkston, The Dewarists, Sarah Slean, Kid Canaveral, Prides, Fat Goth, Young Fathers and Will Hanson. Cairn String Quartet also opened the Edinburgh Film Festival. The ladies ended a very successful 2013, hosting the BBC Radio Scotland Christmas Show with Vic Galloway and collaborating with Conquering Animal Sound, Hector Bizerk and Kid Canaveral.
2014 releases include of the #quartetquickies album, as well as an EP of their own compositions. The quartet travel to Austin, Texas in March 2014 to showcase at SxSW and collaborate in a show with renowned trio, Young Fathers.