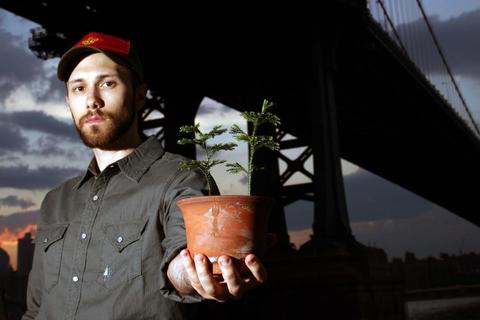 East Forest weaves ethereal soundscapes from his vintage keys, intimate vocals, and original field recordings. His sonic architecture reflects motifs of nature and the inner spiritual landscape juxtaposed with the realities and possibilities of modern society. The emotive music experiments with elements of pop and contemporary themes while leading the listener on a sensual ambient journey.

The wide ranging textural sound has been called “blissful” (NPR) and compared to a cross between Sigur-Ros, The Album Leaf, and Bon Iver. He has collaborated with Deepak Chopra, shared stages with artists ranging from Moby, Sarah Neufeld, to Random Rab, and composed and licensed music for apps, video games, tv/film, theatre, and dance companies. The debut album, The Education Of The Individual Soul worked to bring the essence of the wild to the earbuds of the urbanites and his live performances established Oswalt as a pioneer of laptop free looping.

Trevor Oswalt -- “Oswalt” translates from the German to mean “East Forest” -- founded the project in 2008. He has since released six full length albums including a large body of live performance recordings. A lifelong student of the scientific and sacred power of sound healing, he travels the globe leading sound retreats in locations ranging from the mountains of his native Pacific Northwest and his adopted Southern Utah to the Amazonian jungle and the desert of Morocco. After a decade in New York he is currently based in Portland, OR where the project has grown to include additional members ranging from guest vocalists, bass, drums and strings.

East Forest has performed throughout North America and will be a featured artist at SXSW 2014. As an innovator in the world of yoga, meditation, and the healing arts he collaborates with a wide range of international teachers and has been featured at multiple Wanderlust festivals. East forest has created a new type of aural experience using music as a “technology” that can intentionally facilitate a heightened odyssey of body, mind, and spirit.

In 2012 an eerie “double” bicycle accident that badly broke Oswalt’s left arm threatened to end his career -- he had seriously broken the exact same two bones as a prior accident four years earlier -- the mishap catalyzed a winding quest for recovery that took him around the world that resulted in the second studio album, Love Bomb. Out of years of extensive live shows he has also birthed four live improvisationally based albums, Crystal Starship, Port Landers, Music Meditations, and most recently, Prana. A self described “reformed Eagle Scout”, Oswalt now applies his technical prowess, discipline, and love of exploration to creating a hand crafted sound imbued with his love of the natural world.