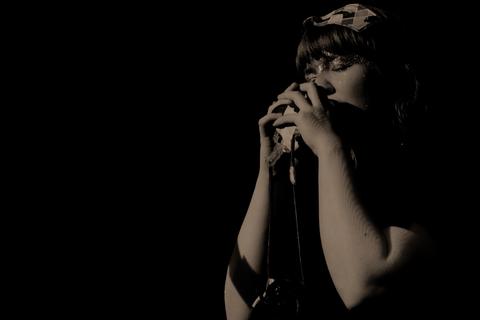 Kira Kira is Kristín Björk Kristjánsdóttir, a composer and audio/visual prankster from Iceland. As a founding member of Kitchen Motors, a mischievous label and collective based on experiments in electronic music and arts, she continually breaks boundaries between forms and genres through a repertoire that includes compositions for theatre, film, dance and art installations – as well as playful multi-disciplinary productions that exceed her work as merely a composer. Kira Kira sprang from this collective in 1999 and to this day works with Kitchen Motors’ ethos at heart -a spirit of playfulness, exploring the relationship between experimental music and visual arts, collaborating with various artists.
At first Kira Kira played solo but since year 2008 she has recorded and played with a wide range of musicians, mostly trumpet player Eiríkur Orri Ólafsson, Finnish percussionist Samuli Kosminen, contrabass wizard Borgar Magnason and artist Alex Somers as well as guitarists Hilmar Jensson and Pétur Hallgrímsson.

Her first feature film as director and screenwriter, Grandma Lo-fi – The Basement Tapes of Sigridur Nielsdottir is just out and has been celebrated in New York’s Museum of Modern Art; MoMA, CPH Dox, SXSW and a plethora of other festivals around the world.

She has released 3 albums, Skotta, Our Map to The Monster Olympics and Feathermagnetik which came out on Morr Music’s Sound of a Handshake moniker in 2012 and on Afterhours in Japan.