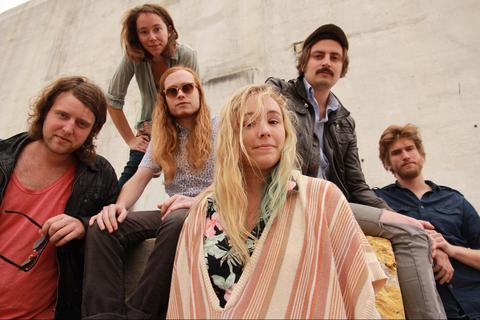 Wild Child’s founding members Kelsey Wilson and Alexander Beggins first met in 2009 while touring with a Danish act called The Migrant. Both call Texas home: Wilson, a classically-trained violinist who wrote her first songs under the wing of legendary country music outlaw Ray Wiley Hubbard, hails from the fabled bluegrass circles of Wimberly; and Beggins, a ukulele player from Houston, was finishing up at The University of Texas while on the that tour. The way Wilson tells it, “We mainly got to know each other through what we called ‘backseat business school’: we just got our hands on a whole bunch of red wine and hit the books.” But when the two put the books aside and wrote their first song, the chemistry was undeniable. “We couldn’t stop writing music together,” Wilson laughs. “Before we knew it, backseat business school became the band.”

The two rented out an unfurnished home studio in Austin to write and record 2010’s Pillow Talk. That record was by definition a work in progress. As they built the record, they also built the band, calling in friends Carey McGraw to play drums and Saide Wolfe to play cello. Wilson—almost impossibly, considering how naturally she commands her supple voice now—hadn’t sung a note for anyone before taking the lead for Wild Child. “Some of those songs,” Beggins says, “we didn’t even finish writing until we were recording.” Their unorthodox recording strategy proved to be successful as their self-released debut went on to make waves in the indie music world. Pillow Talk garnered three number one spots on the indie music trendsetter website Hype Machine and has been streamed over 3 million times on Spotify. On tour, they tried to transfer that mostly acoustic record to a live show and define themselves as a band, but as Wilson says, “Drunk people don’t really like quiet music at a bar, and we had more fun playing our songs rowdier and faster and louder.” The group shifted to a larger, more percussive style, adding Evan Magers on keys and Chris D’Annuzio on electric bass to swell their sound.

And so this year, when Wild Child emerged from the studio after recording their second full-length album, The Runaround, you’d be forgiven for wondering if the band’s name still applied. That’s primarily because the first record was a sort of artistic adolescence. With The Runaround, Wild Child worked with Grammy-nominated artist Ben Kweller as producer. Kweller was instrumental in harnessing the band’s youthful energy and bringing out the uniqueness of their music. Wild Child has officially come of age.

The sound on The Runaround isn’t exactly a departure. Wild Child hasn’t lost any of the velvety melodies, storyline drive, or the wry delivery that established them from the start as a band of uncommon character and narrative reach. This dynamic, confident record is simply a natural extension of all of those things. Kweller personally contacted the band upon first hearing Pillow Talk, and soon had the new singles picked. The infectious hooks and fully-realized sound have so far earned the group national exposure, including a feature segment on Last Call with Carson Daly filmed during this year’s SXSW. That same week, Wild Child was named BEST INDIE ACT and BEST FOLK ACT at the annual Austin Music Awards. Says Beggins, “We’ve now moved beyond the whole folk thing. With this record, we were trying to see how big we could get the bubble before it burst.” The band also has the same advantages that we all get from a few more years of living: these songs still reflect on young love, but they’re a little wiser, more at home with the uncomfortable realities of loss and uncertainty, acknowledging in one song that we’re “born to change our minds.” However, the band wrote this record conscious of making for a dynamic live show, and they swagger happily through this uncertain world, swaying with drunken horns in “Stitches,” whistling the addictive hook on “Crazy Bird,” and stepping high to crisp, insistent beats, hearts broken but chins up. The songs Beggins and Wilson are writing are still red wine—still bittersweet—but this is a band that can tolerate, and celebrate, the tannins.