One on One with Reagan Gomez Preston 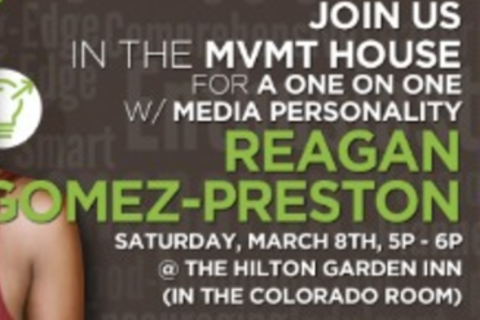 You've posted your morning selfie & inspirational quote but have you actually done anything to elevate your personal brand? Are you building a personal brand that will ultimately lead you back to the bank?

In today's media landscape, personal branding & content brands have collided. High impact twitter conversations become tomorrow's news headlines. Celebrity Instagram photos are inviting the audience into the personal lives of stars as much as they are becoming marketing tools. From Spike Lee to Veronica Mars, celebrities are also leveraging their personal brands to crowdfund projects & create new models for content creation. How do you as a content creator leverage your personal brand to do the same?

Leigh Davenport is the Editorial Director of HelloBeautiful and creator of Situationships.tv. She's specializes in multi-media brand expansion and has brought the HelloBeautiful brand to broadcast TV with “HelloBeautiful Interludes Live!” which launched on TVONE in 2013. She's also launched the HelloBeautiful annual Women in the Workplace Workshop, which focuses on grooming minority women for career advancement as well as various other web series and syndicated franchises. She's previously written for NewsOne, TheAtlantic and TheGrio and has co-written “BET's Black Girls Rock!” since it debuted on television in 2010. She's a proud graduate of Spelman College and has a MA in Media Studies from The New School University. Most importantly she's a born and raised Chicagoan and a die-hard bulls fan! Follow her on Twitter @leighdav.

She’s graced the big and small screens numerous times with lead roles in Never Die Alone, opposite DMX, David Arquette and Michael Ealy, Jerry McGuire, with Tom Cruise and Cuba Gooding Jr, Love Don’t Cost a Thing, with Nick Cannon, Beauty Shop with Queen Latifah, Dysfunctional Friends with Meagan Good and Stacy Dash along with many other films. Reagan’s graced the tv screen in show’s like Love, Inc. opposite Holly Robinson Pete, and the successful long running TV show, The Parent Hood. Her most recent tv show, is the animated Fox hit, The Clevelenad Show opposite Sanaa Lathan and Seth MacFarlance. Reagan’s newest tv show is the TV ONE hit, Love That Girl. Her other small screen appearances include, ER, That 70’s Show, JAG, Till Death, The Soul Man, One on One, Love Will Keep Us Together, and If You Really Love Me.