Portlandia: Behind the Scenes with the Creators 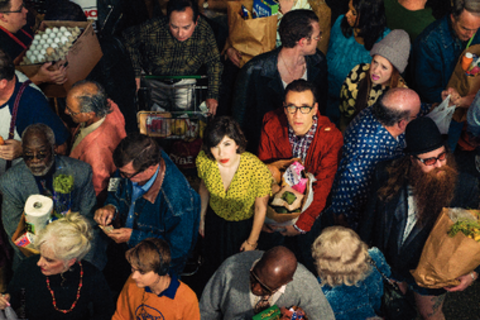 Award-winning IFC series Portlandia is one of the smartest comedies on the air and SXSW is getting a special look at their latest season. Preview clips from the upocming fourth season of Portlandia, followed by a discussion with series creators Fred Armisen and Carrie Brownstein. Learn more about the writers' and co-stars' creative process, and get some behind the scenes info on this hit show; moderated by Matt Braunger.

Carrie Brownstein is the co-creator, co-writer and co-star of Portlandia as well as anauthor and musician. She made her television career debut in 2011 with Portlandia, and in 2012 and 2013 received an Emmy® nomination in the “Outstanding Writing for a Variety Series” category for her work on the series. The show also received the prestigious Peabody Award for excellence in 2011. The critically acclaimed show enters its fourth season on IFC in 2014.

She first rose to prominence as a member of the critically acclaimed rock band Sleater-Kinney. Brownstein was named one of the top female electric guitarists by Elle and Rolling Stone lists Sleater-Kinney’s song “Dig Me Out” as “One of the 50 Greatest Guitar Songs of All Time.”

Brownstein’s writing has appeared in The New York Times, The Believer, Slate and numerous anthologies on music and culture. She is currently working on a memoir for Riverhead Books.

Fred Armisen is one of the most diversely talented performers working today with credits that run the gamut from acting, producing and writing in both comedy and music.

He is the co-creator, co-writer and co-star of IFC’s Portlandia alongside Carrie Brownstein. The critically acclaimed show enters its fourth season in 2014. He received an Emmy® nomination for “Outstanding Writing for a Variety Series” in 2012 and 2013 category for his work on the series. The show also received the prestigious Peabody Award for excellence in 2011.

An eleven season veteran of Saturday Night Live, he has engaged audiences with memorable impressions and characters including world leaders like President Barack Obama or Iranian President Mahmoud Ahmadinejad in the popular digital short “Iran So Far Away” to “Weekend Update” fixtures like political comedian Nicholas Fehn or half of the songwriting team of Garth and Kat (with Kristen Wiig) to name a few. He closed out his last season in the guise of British punk rocker Ian Rubbish with a star-studded performance of the original song “It’s a Lovely Day.”Armisen has landed on Rolling Stone’s “Hot List” and has several times on Entertainment Weekly’s “Must List.” He has appeared in countless feature films including Easy A, The Rocker, Confessions of a Shopaholic, Eurotrip and ThePromotion as well as lending his voice to the feature The Smurfs. He has also appeared in the films Tenacious D in The Pick of Destiny with Jack Black, Baby Mama with Tina Fey and Amy Poehler, The Ex with Zach Braff and Jason Bateman, and in Will Ferrell and Adam McKay’s Anchorman: The Legend of Ron Burgundy.He has made guest appearances on Brooklyn Nine-Nine, 30 Rock and Parks and Recreation, and the cable comedy shows The Sarah Silverman Show, Human Giant and Tim and Eric Awesome Show, Great Job! He was also seen in the smash kids show Yo Gabba Gabba on Nickelodeon.

His career began as a musician in the Chicago-based post-punk band Trenchmouth as well as playing with the Blue Man Group. His transition to comedy came with the 1998 underground short film Fred Armisen’s Guide to Music and SXSW which followed him through the Austin, Texas “South By Southwest Music Festival” posing as a music journalist. In 2006, he interviewed Cat Power for the influential music website Pitchfork.com and later combined his love for music and comedy by creating the role of drummer Jens Hannemann and releasing an instructional DVD,Complicated Drumming Technique, in 2007.