Agile Methodologies from an Agile Continent 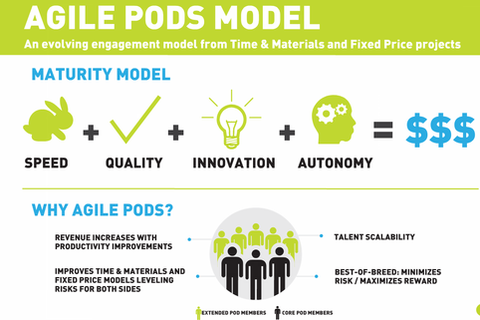 In recent years, Agile has impacted the way we create software. Delivering great digital experiences, arriving first to market and staying within budget is a growing dilemma in the technology space. We will talk about Agile Pods, a delivery model with an agile foundation, which addresses team dynamics, gamification and cultural bonding planted along a team maturity path. Agile Pods bring a better alignment between business and technology teams, driven by a culture of self-regulated teamwork and collaboration across skills, partners and country borders. We will show you examples of how this model works, and why it is impacting the way we create products. Why is Agility innovation coming from Latam? Latin Americans have dealt with turbulent economies, new legislation, and political shifts which have impacted their daily lives. It’s no surprise that the adoption and evolution of agile models has been so natural in the region, as adaptability and tolerance to change are part of their DNA.

Andres is Globant's Chief Solutions Officer. A senior executive with extensive background in developing large-scale technology businesses. A proven leader, effectively deploying technology and business process strategies.
His specialties areas include Game Development and Enterprise Software Architectures. He started his career in Argentina as a software developer and later took technical management roles as Senior Architect at Citi, EDS, Synthesis and worked for a number of start-ups. He led R&D software groups, and created innovative online products for web, mobile, online communities and ecommerce.
Andres has lived in Buenos Aires, New York, London and California. He holds a BA in Business Management and a Masters degree in Software Engineering. He possesses a particular blend of technology and business acumen, leads a fast paced entrepreneurial management style, and has a sheer passion for creating value for his customers.

Pablo graduated in Computer Engineering from the Technion (Haifa, Israel), and worked developing TCP/IP routers since 1987. In 1993 he co-founded Alvarion, which was one of the first companies to release WIFI products, bringing the company from a small start up with 2 employees to more than USD 100 million revenue company with hundreds of employees, going through a successful IPO in NASDAQ in March 2000. At Alvarion Mr. Brenner acted as Vice President of Research and Development at the Tel Aviv Headquarters, and later as VP Latin America.

Since 2005 Pablo is Partner at Prosperitas Capital Partners, currently the only Venture Capital Fund in Uruguay, with a Portfolio of over 20 companies.

Mr. Brenner has been one of the authors of the Wifi Specification (IEEE P802.11), and holds a US patent in “Fast roaming Algorithm’s for Frequency Hopping Networks".

Pablo has been an active member of the Board for Endeavor Uruguay, being Chairman of the board from 2003 to 2006.