Austin, Texas: A City with a Soul 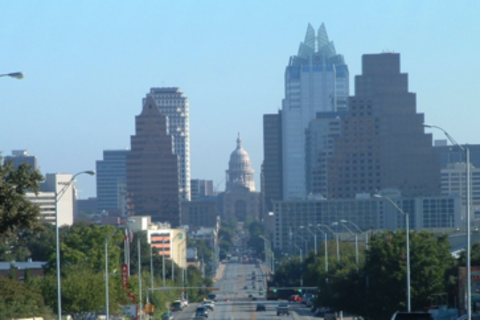 Cities “come of age”, just like people do and Austin is a city of the 21st century. Austin is regularly ranked as one of the top cities in the US in terms of growth, job creation, cost of living, and quality of life. In this session we will discuss:

* What makes Austin such a desirable place to visit, live and work and a perfect place for a diverse conference such as SXSW?
* What are some of the most important things that people should know about the essence of Austin?
* How is the flood of new influences entering into the city affecting Austin's culture?
* Why do so many people find the spirit and soul of this city so precious and worth preserving?

We have all heard about the theme “Keep Austin Weird”, but how do we "Keep Austin - Austin"? Join is for what is sure to be a spirited discussion on what makes this city so special and how each of us can take actions to help preserve the essence and soul of the city that we love so much.

CAROL THOMPSON BIO
Carol Thompson is an entrepreneur, economic development strategist, mentor and business advisor. After serving as CEO of a five-store Computerland franchise, co-founding Hiretech (a recruiting firm), and concurrently Thompson Executive Search, Carol founded Thompson Group in 1993. The Thompson Group has since served upwards of 100 clients ranging from local to Fortune 500, from Services to Technology, from Manufacturing to Healthcare, from Legal to Education.
Thompson has played a significant role in bridging of Austin’s new and traditional economies. As a Leader on the first Austin Chamber of Commerce business recruiting trip to California in the late 80s, Carol and the Chamber Team laid the groundwork for a future influx of those companies into Austin . In 1990, Thompson chaired the Chamber Board and that year 35 companies expanded to Austin, while twenty-five local companies expanded as well.
Carol served a six year term on the San Antonio Branch of the Dallas Federal reserve Board. Her term as board chair ended with a Dallas Federal Reserve Board dinner in Dallas with a keynote speech by Chairman Greenspan. Soon thereafter, Mr. Greenspan sent a hand-written note to Carol Thompson thanking her for her service to the country! Thompson has served on 30 boards, including the World Congress of Information Technology Advisory Board, a Board assembled when Austin hosted 83 countries at the WCIT Conference.
Carol has been recognized by the Austin Business Journal as "one of Austin's 5 most powerful women" and named by the Austin American-Statesman as one of Austin's "top 25 tech players to know." She was on the cover of Digital South Magazine, which named her "A Real Hero of Southern Technology", and was lauded in an October issue of eCompany as one of the "Nine People to See in Austin." She received the Women in Communication Liz Carpenter's Lifetime Achievement Award. In addition, Carol was the recipient of the Office Depot National Woman in Technology Award presented by the Office Depot National President.
Bard Press of Atlanta and Austin published the book, Masters of Networking, which included an article authored by Ms. Thompson: “Relationships Count More Than Ever”.. This book debuted on the New York Times Best Seller list. Additionally, University of Texas Moot Corp. Director Gary Cadenhead discussed Carol and her company's FACE TO FACE Strategic Business Networking Event in his book.
In the book, entitled NO LONGER MOOT: The Premier New Venture Competition from Idea to Global Impact, Carol and her FACE TO FACE event are cited as the origin for the relationship that made the creation of the book a reality. More recently, the book entitled A Cup of Cappuccino for the Entrepreneur’s Spirit authored by B. Nord and Cindy Patterson-Thompson includes Carol’s entrepreneurial journey.
Vision, connections, know-how, energy, commitment, ethics, experience –
Carol Thompson is the distillation of multiple pathways to success.

Formula One 2012 Host Committee
University of Texas Cockrell School of Engineering Advisory Board
Texans for Economic Progress: Technology Advance Texas Board member
St Edward’s University School of Management and Business Advisory Board
Junior Achievement
Ernst and Young Entrepreneur of the Year Advisory Board
Young Women’s Alliance, Founder and Advisory Board
RISE Austin Board of Advisors

Past Boards and Committees

Jeff is an experienced executive and entrepreneur. He has developed and managed partnerships for some of the world's largest companies. Currently Jeff serves as VP of Strategic Partnerships for Mutual Mobile, the nations largest custom mobile services company. Previously he served as VP of Sales, VP of Business Development, and VP of Account Management for the nations leading IT asset recovery services company. He also founded the nation's largest collectible art sculpture gallery. Jeff has a BS degree in Business Management from Cornell University.

Approximately 15 years ago Jeff and his wife chose Austin as the ideal place to live, work and raise their family. Consequently they sold their business in Minneapolis and moved to Austin. Still today there is no place they would rather live.

Founder & Chairman of the Board

John Arrow, Founder & Chairman of the Board
John Arrow is a veteran of entrepreneurship with a passion for harnessing disruptive and emerging technologies. His ability to combine market vision with methodical execution has propelled Mutual Mobile, Inc. to become the world’s largest mobile consulting company.

Over the last ten years, John founded successful businesses in the online payment processing industry and the consumer and enterprise software spaces. He also created one of the first site targeted PPC advertising networks. An adventurer and an innovator, John guides Mutual Mobile with a continuously evolving vision for the future.

Kim Overton launched the SPIbelt™ (“Small Personal Item Belt) at the Austin Marathon in 2007 with her own capital and a lot of passion from her studio apartment in downtown Austin. Four years after launch she debuted on the Inc. 500 list at #175 as one of America’s Fastest Growing Companies with sales of over $4 million, and continues to grow with increased international exposure and popularity in the running, fitness, and special medical device markets.

A year after launch the SPIbelt was featured on shows such as The Big Idea with Donny Duestch, The TODAY Show, CNN, The Rachel Ray show, and is now seen on QVC.

Kim credits the company’s rapid growth to aggressive grassroots marketing campaigns, the support of Austin businesses and runners and enthusiastic fans around the US.

The SPIbelt has made a cameo on Lucy Liu during her show, Elementary, and can be seen on the waists of runners and walkers at races across the country and in dozens of countries around the world.

SPIbelts are made in Austin, TX.