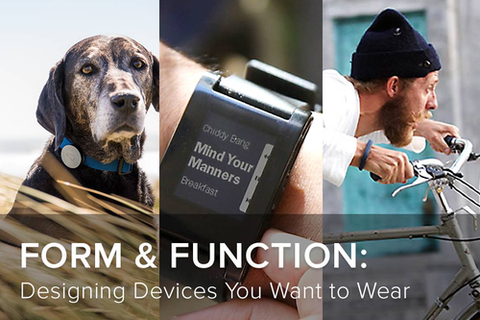 This panel will bring together a handful of breakout designers across various industries to navigate the trade-offs and challenges that arise when designing wearable tech products that must be both functional and attractive without exception. Executives and designers from Pebble, Whistle, and Jawbone will discuss the depth and breadth of product design, from concept to execution, outlining real-life creative lessons learned. As new players enter the market, it’s becoming increasingly important that wearable tech presents consumers with opportunities for logistical efficiencies while also accounting for human preference and intuition. Learn from the industry leaders about what it takes to create successful products people love to use and show off.

Aza Raskin is currently a VP at Jawbone, an industry leader and innovator in the wearable technology space. In early 2013, Jawbone acquired Massive Health, a health and wellness company committed to making healthy living more attainable for all, which Aza founded. Prior to Massive Health, he was Creative Lead for Firefox and a founding member of Mozilla Labs. Aza also founded and sold two other companies, including Songza.com which is currently one of the top music apps on the app store. He also creates modular cardboard furniture called Bloxes which are used everywhere from Google to Twitter. In another life, Aza has done Dark Matter research at both Tokyo University and the University of Chicago, from where he graduated in math and physics.

Dieter Bohn is a leading voice within the technology industry, where he has gained notoriety for his expert coverage of the smartphone space. Currently, Dieter is an assistant managing editor at The Verge, a news web site heralded for its in-depth reporting style spanning the intersections of technology, science, art, and culture. Dieter provides his readers with hard-hitting industry news and comprehensive product reviews that provoke thought and elicit riveting commentary. He also manages the reports team at The Verge, delivering in-depth journalism on technology and culture. Prior to The Verge, Dieter was the the editor-in-chief for the Smartphone Experts network of sites (Android Central, iMore, CrackBerry, and more), which is comprised of the some of the largest and most influential smartphone communities on the web.

Eric Migicovsky is the founder and CEO of Pebble Technology, the company behind the Pebble watch, a smartwatch for iPhone and Android. While studying engineering at the University of Waterloo, Eric began building smartwatches alongside a group of friends and created the first model, InPulse. In April 2012, Eric and his team launched the second generation, Pebble, on the Kickstarter crowdfunding platform, where it became the most successful crowdfunded project in Kickstarter’s history.

An engineer and entrepreneur, Eric is passionate about developing well-designed, creative products that integrate smoothly into daily life. He lives in Palo Alto where he and the rest of the Pebblers are busy working on the first watch built for the 21st century.

Steven is the co-founder and Head of Product at Whistle, where he and his team have led the charge in designing the brand’s flagship intelligent on-collar monitoring system for pets. Steven co-founded Whistle following his time at Spectrum Equity, where he focused on investments in consumer Internet. Previously he spent time driving online strategy for Warner Music Group and working at Bain for a number of technology, healthcare and private equity clients. Steven graduated from the University of Pennsylvania.