Beyond Dots on a Map: Visualizing 3 Billion Tweets 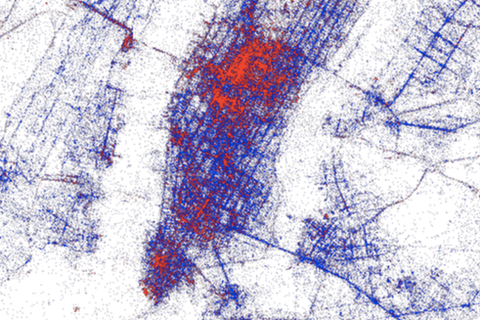 What can 3 billion geotagged Tweets collected over 18 months tell us about the world?

We mapped this huge data set, taking a look at Twitter's userbase in incredible detail – revealing demographic, cultural, and social patterns down to city level, across the world. This is a story about working with 3 billion Tweets, and a search for patterns in a big set of data that evolved over time.

As we began working with the data, stories emerged on the map – road networks around the world lit up, we discovered where tourists go vs. where locals hang out, saw gentrification boundaries reflected in Tweets from Android vs. iOS, and uncovered the complex patterns of languages spoken within and across countries.

In this session we'll walk through the maps and talk about the stories in data. We'll also talk about lessons learned and how to work with geodata at this scale. We'll end with a vision of what we can expect to learn as geodata evolves as a critical component of all social data.

Prior to Mapbox, Eric co-founded Development Seed. Eric is a recognized expert on open data and open source software and has been featured in publications including the New York Times, Nightline, NPR, and others. He is frequently invited to speak on topics including open data, data visualization, and open source business models and has presented at conferences such as SXSW, Web 2.0, Where 2.0, GOSCON, and NodeJam.

He holds a master’s degree in international development from American University in Washington, DC, and has dual bachelor’s degrees in economics and international relations.

Ian Cairns is a Product Manager at Gnip, the world’s largest provider of social data, where he leads work on data Enrichments products. He is helping drive the adoption and use of social data at large scale for uses ranging from marketing to disaster response.

He started his career working on public policy and focused that energy at Development Seed building software products for the world's largest NGOs, including ground breaking data tools and visualizations like data.worldbank.org. He was part of the team that launched MapBox, and spent two years as a technology advisor to Federal government agencies and the UN OCHA.

Ian has spoken on topics like using social data for public good at Big Boulder 2012, and using maps and open data to fight human trafficking at the University of Nebraska. He has written as a blogger for PBS IdeaLab and The Center for American Progress’ Science Progress blog and appeared in interviews with The Washington Post, Wired.com and FastCompany.com.