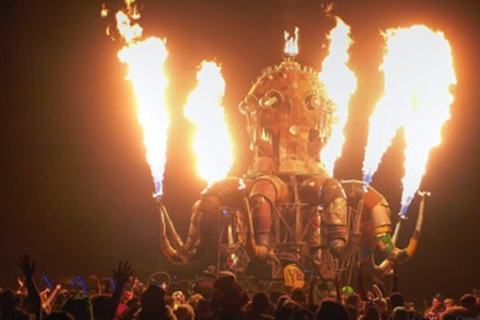 How do organizations such as Burning Man, Google, Maker Faire and The Flux Foundation enable people to consistently make such incredible inventions? What can businesses learn from these wildly creative and successful groups? They each prioritize the cultivation of “permission engines,” wherein innovations in art, science and technology flourish without limitation.
When people feel inspired, engaged, and supported, and are given permission to exercise their full creative potential, the opportunities for invention are endless. But how do you foster that kind of freedom in your organization? This diverse panel of thought-leaders will talk about their real-world experience with these models, and share the secrets of not only inspiring the very best creativity in your people, but also keeping them empowered to do even more.

Aaron Koblin leads Google's Data Arts Team in San Francisco. He is an artist and designer specializing in data and digital technologies. Aaron's work uses real-world and community generated data to reflect on cultural trends and the changing relationship between humans and the systems they create. His work is part of the permanent collection of the Museum of Modern Art (MoMA) in New York, the Victoria & Albert Museum (V&A) in London, and the Centre Pompidou in Paris. His projects have been shown at international festivals including TED, Sundance, Tribeca Film Festival, Ars Electronica, SIGGRAPH, OFFF, the Japan Media Arts Festival, and more. He received the National Science Foundation's first place award for science visualization and two of his music video collaborations have been Grammy nominated. He received his MFA in Design|Media Arts from UCLA, and in 2010 Aaron was the Abramowitz Artist in Residence at MIT.

People have often described Jessica Hobbs as someone trying to lead a compulsively artistic life, which is more or less true. She started off her adventure in a small Sierra Foothill town and eventually meandered her way to the San Francisco Bay Area. Along the way Jess has worn many hats; running and creating community art programs, counseling teenagers, curating, exhibiting, designing, photographing, running a power company, and playing with some girls who love lipstick and accelerants. She is an MFA graduate from the San Francisco Art Institute and believes collaboration is key in community and art. This can be seen through the work of her non-profit the FLUX Foundation and her open-source alternative energy company All Power Labs.

Louise Glasgow, Producer, Maker Faire, Maker Media’s award winning event developed by Make Magazine which focuses on education within the DIY movement, celebrating art, craft, sustainability, engineering, science & technology. Integral to the conception of Maker Faire, Louise has successfully collaborated with many artists and makers to create the making spirit at Maker Faire. With over 30 years of production experience, Louise has been instrumental to the success of a vast array of projects such as the Int’l Conference on AIDS, Creative Director for Sportsmark at the 2002 Winter Olympic Games, inaugural producer for Dwell on Design, SunNetwork, ESPN’s MLBPA Player’s Choice Awards & Big League Challenge and logistics producer for Oracle’s 2000 iDevelop World Tour which represents a show 22 countries in 26 weeks. Louise has produced creative themed events in over 24 international and 32 domestic locations.

Will first attended Burning Man 2001. He was Burning Man's Web Team Project Manager and Webmaster from 2004-2009, and the Operations Manager and member of the Art Council for the ARTery (Burning Man's art department headquarters in Black Rock City) from 2003-2008. In 2009, he transitioned into the Communications Department, where his responsibilities include global communication strategy, authoring the Jackrabbit Speaks Newsletter, content management for the Burning Man website, coordination of Burning Man's social networking efforts, and acting as editor for the Burning Blog.