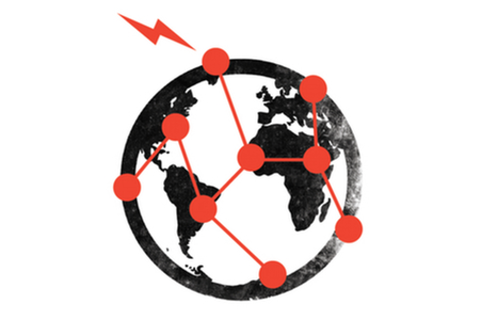 Superstorms, bombings and protests around the globe are challenging the way people use technology to respond to crisis and conflict. Journalists, hackers and local people are collaborating to better cover, communicate and support their communities. Using new technology, people all over the planet can participate in providing aid in various forms.
Come play with new tools and apps being designed to document and fight human rights abuses and help rebuild after natural disasters. Learn how ad-hoc networks of digital first responders are keeping people informed and connected through chaotic and frightening moments of crisis. These new networks are challenging old institutions, but do they lack the longevity to sustain longterm change?
With examples from around the globe, we’ll examine how media coverage and Internet activism shapes our responses to natural disasters and ongoing conflicts.

MY NAME. Adaora is Nigerian meaning daughter of all. My Irish passport sits alongside my U.S. passport. All courtesy of my parent’s lineage. I’ve made good on that destiny as a global nomad, living and reporting from all over the world.
A SURPRISE TURN. I started my professional life as a would-be tax lawyer, even clerking for the IRS. It didn’t last long. I ended up at ABC News covering the OJ Simpson criminal trial and spent years as a journalist.
TODAY. Happily, I was swept up in the tech revolution, working now as Interim President of News Deeply. Check out our flagship vertical: www.SyriaDeeply.org. I'm a proud adviser to Hubster.TV http://hubster.tv and Single Palm Tree Productions http://singlepalmtree.com. I serve as a mentor for Women Innovate Mobile, a startup accelerator http://wim.co and am a 2013 Pipeline Fund Alum. http://www.pipelinefellowship.com
ADVENTURES. As a producer, correspondent and anchor I reported from four continents and hundreds of cities working for ABC, CNN, Court TV and WNYC. The things I saw changed my life. I will never forget after Saddam Hussein was ousted, speaking with Iraqis in Baghdad who were looking for family members that had been missing five, sometimes 10 years. They never lost hope. Or the Afghan refugees I met cherishing life from mud huts outside Islamabad, Pakistan. The pristine Lake Geneva in Switzerland is unforgettable, as is seeing Lance Armstrong and hundreds of bikers roll onto Paris's Champs Elysee during the Tour de France. I still remember faces among thousands supporting candidates while covering four U.S. Presidential campaigns from Seattle to Aspen to Boston. We have far more in common than we have differences.
FUN TO BE RECOGNIZED. The National Academy of Arts & Sciences recognized my reporting of the Afghanistan war. I was named one of the 25 most influential African-Americans-Essence Magazine. I was acknowleged for contributions to CNN's Peabody Award win for coverage of Hurricane Katrina and a DuPont-Columbia University Award for reporting on the 2005 South Asian Tsunami.

Josh fights for the future of journalism through media and technology policy. His writing, research and activism have centered around creating healthier and stronger communities through service, education and media. Josh currently manages Free Press' journalism, public media and media consolidation campaigns where he helps amplify the voice of local people in the media policy debates happening in Washington, DC.
Josh develops online and offline strategy, outreach and organizing efforts for Free Press. He has published numerous reports on press freedom, journalism, media consolidation and public media, and speaks regularly about community engagement, activism and the future of journalism. His writing has appeared in BoingBoing, PBS MediaShift, Orion Magazine, the Columbia Journalism Review, Mother Jones and Yes Magazine.

At the Brooklyn-based human rights organization, WITNESS, Madeleine Bair curates the Human Rights Channel, a collaboration with Storyful on YouTube.

Madeleine has been carrying a microphone in her backpack since she belonged to the Oakland bureau of the pioneering youth media organization, Children's Express. Since then, Madeleine has upgraded from cassette to digital and branched out to print, film and multimedia work. She has taught radio production to young adults, produced a documentary about the Latino dropout crisis for PBS, and worked as an I.F. Stone Fellow at Human Rights Watch.

As a UC Berkeley Human Rights Center Fellow in 2010, Madeleine collaborated with Jamaicans for Justice to document police brutality. The resulting multimedia video was presented to the Inter-American Commission on Human Rights and is used to educate and inform Jamaicans about police abuse and the justice system.

At WITNESS, Madeleine leads a project curating citizen video of human rights abuse around the world. She works with peers in the fields of advocacy and news media to develop ways to safely, ethically, and effectively work with citizen footage to document social issues. Her writing on the safe and ethical use of citizen video is included in the Verification Handbook, a resource for journalists and crisis responders published in early 2014 by the European Journalism Centre.

Center for Civic Media at the MIT Media Lab

Matt's a civic technologist. He's studied and built creative technologies in advocacy, politics, startups, news media, and peer-to-peer humanitarian aid. Matt likes to design and write. He recently finished a Master's at the MIT Media Lab, and is freelancing for a variety of clients interested in making the world better in fun and useful ways.